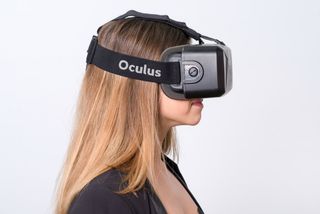 Virtual reality means creating immersive, computer-generated environments that are so convincing users will react the same way they would in real life. The idea is to block out the sensory input from the outside and use the visual and auditory cues to make the virtual world seem more real. While the concept is simple, actually building virtual reality systems has proven difficult to do, until recently.

"The big difference here is the sensory deprivation," says game developer Eric "Giz" Gewirtz, chief creative officer at Seismic Games in Los Angeles. "You're more susceptible to real life-like experience — on a very primitive level you're tuning everything out."

The term "virtual reality" dates back as far as the 1930s, though in that case it was referring to theater. In the 1960s, Morton Hellig, a cinematographer, invented a machine called the "Sensorama." The machine used wraparound screens viewed with a binocular-like device to get a 3-D effect, a seat that moved and vents to blow air at the viewer, and the then-new stereo sounds to simulate activities like riding a motorcycle. The Sensorama remained a novelty, though.

Once modern computers appeared, along with television and early 3-D movies, science fiction writers picked up on the possibilities for creating environments that would look and feel real; Ray Bradbury's short story "The Veldt" from 1950 describes a nursery run by an artificial intelligence run amok. That concept of virtual reality — a computer-generated world that mimics reality — is one of the earliest instances of the concept we'd recognize today. Yet that meaning of virtual reality didn't enter the popular lexicon until until the 1970s and 1980s. Science fiction author William Gibson was one of the early popularizers of the term, famously in his novel "Neuromancer." Even so, there's a clear through-line of the concept of simulating a world, from Bradbury and Gibson through to Star Trek's holodecks.

Better computers and sophisticated graphics processors got video game designers interested in making their games more "real." A famous example is Atari's Battlezone, some versions of which involved looking through a periscope-like viewer.

Virtual reality headsets would have to wait until the 1990s. Sega tried introducing one and managed to get it into arcades. The headset could track the user's motion to keep the field of view aligned with where the head would be in the virtual landscape. The headset called Sega VR failed to break into the home market, however.

Even the U.S. military got into the act, as the Department of Defense attempted to use virtual reality simulations for pilot training. It turned out the traditional flight simulators were superior, because the people using the VR headsets would get nauseous.

Virtual reality headsets seemed to go the way of earlier gimmicks like Smell-O-Vision, until the Oculus VR built the Oculus Rift and HTC created the Vive.

Both of the new headsets are considerable advances over earlier efforts. The visuals are more realistic, and the design of the headsets is better at blocking out outside stimuli. Gewirtz adds that dealing with the nausea goes a long way as well. Changing the frame rate of the animation helped, as well as designing the in-game movement so that it is more gradual. "It's the lateral movement," he says. Your eyes are telling you one thing and your brain (via your balance sensors in the inner ear) is telling you something else.

That said, the new headsets got better in part because they focused on hearing and sight, the two senses people are most engaged with. Early ideas about virtual reality included full-body suits, and there are still some people working on adding more tactile sensations. In general though, technology has gotten smaller and more portable. "We've really gone in the opposite direction [from full suits]," Gewirtz says, though it's possible that could change in the future.

This makes current VR different from even the earlier video games that allowed you to sit in a pilot seat, since there's no "distraction" from the outside world. "Those games you were always quietly aware you were in a booth," Gewirtz says.

Virtual reality offers options to game developers that even the best ordinary console games do not. Since the VR headset can track where one's eyes are focused, it allows in-game characters to make eye contact. That provokes a more visceral response from players. Non-player characters can also feel closer. "They can do an invasion of personal space," Gewirtz says, "That makes people uncomfortable."

Another thing virtual reality can do is simulate being somewhere else, also known as telepresence. One could imagine making an environment that simulates being on a mountaintop, for example — offering a kind of vicarious travel to the peak of Everest or the Grand Canyon.

Already Oculus VR is showcasing the Oculus Rift in conjunction with HBO, with the "Ascend the Wall" traveling exhibit, which uses the Rift's simulation capabilities to give fans the experience of riding up an elevator to the top of a 700 foot wall of ice.

The possibilities are endless, Gewirtz says. "There's no real language for making interactive content in VR. No one knows how it's like traditional cinema or games."