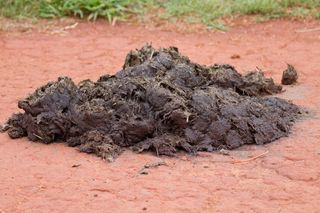 For white rhinos, poop emojis would be the status update of choice.
(Image: © Linn Currie/Shutterstock.com)

In the world of Harry Potter, wizards and witches communicate via the magical Floo Network. White rhinos, however, use a less magical and smellier communication system: a poo network.

Scientists recently discovered that white rhinos' dung contains status updates, with the feces odor broadcasting chemical signals about a rhino's age and sex, and about whether females are in heat or if males have staked out territory.

And forget about private messaging — rhinos use shared defecation areas to leave dispatches that can be "read" by all the other rhinos in their social group, according to a new study. [The Poop on Pooping: 5 Misconceptions Explained]

Communication through urine is well known in many animal species, with males frequently spraying urine to mark their territories and establish dominance. But less is understood about the role dung might play in animals' social communication, the study authors reported.

The researchers suspected that dung likewise included chemicals that can relay specific messages related to mating and territory.

And they were particularly interested in animals that group together and poop together, defecating in communal sites and later making scents of all those mixed — and fragrant — olfactory signals.

Rhinos have poor eyesight, which means they depend heavily on their sense of smell to interpret the world around them, according to study lead author Courtney Marneweck, a doctoral candidate in the School of Life Sciences at the University of KwaZulu-Natal in South Africa.

For a socially minded rhino, community toilets known as middens — where male and female rhinos of all ages deposit their dung — could thereby be vital reservoirs of information about their group, Marneweck told Live Science in an email.

But to understand how that worked, the scientists had to dive into dung more deeply, to investigate rhino poop's unique chemistry and to identify the chemical compounds used by rhinos for scent-coded bulletins.

A prior study had suggested that white rhinos could sniff out the sex of a fellow rhino from the dung it left behind, but for the new study, Marneweck and her colleagues wanted to identify the specific chemicals and link them to messages about territorial claims and sexual availability.

Dung odors are composed of chemicals known as volatile organic compounds (VOCs), which the researchers collected and analyzed from white rhinos in South Africa's Hluhluwe-Imfolozi Park.

Once the VOCs were identified, the scientists linked them to observable behaviors in white rhinos — identifying possible threats or mates. To further test whether they were interpreting the chemicals correctly, the researchers reproduced the VOCs and presented male rhinos with samples of fake dung soaked in one of three artificial odors: the scent of a territorial male, the smell of a sexually receptive female and a neutral scent.

The scientists found that male rhinos responded to the artificial dung much as they did to real dung. The rhinos showed elevated interest in the "female" odors and assumed postures acknowledging a potential threat from the "male" odors, the authors wrote in the study.

"There are a lot of different avenues that are opened now, which is really exciting," she added.

The findings were published online Tuesday (Jan. 10) in the journal Proceedings of the Royal Society B: Biological Sciences.