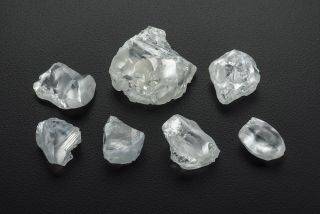 The world's largest, most valuable diamonds may be born in pockets of liquid metal located deep within the Earth, a new study finds.

This discovery suggests that pockets of liquid metal peppered throughout Earth's mantle layer, between the planet's crust and core, may play a key role in how carbon and other elements key to life cycle between the Earth's interior and the planet's surface, the researchers said.

In general, diamonds form deep in the hot rock of Earth's mantle, rising to the surface with volcanic eruptions. The biggest gem-quality diamond found to date is the Cullinan diamond, which was unearthed in South Africa in 1905. The 3,106.75-carat diamond, which was later cut up into several polished pieces, originally weighed 1.37 lbs. (621.35 grams), and was about 3.86 inches (9.8 centimeters) long. [Sinister Sparkle Gallery: 13 Mysterious & Cursed Gemstones]

Previous research found that the world's largest gem-quality diamonds stand out from smaller jewels not just in size, but also in composition and structure.

"They have very few inclusions trapped inside them — that is, material that isn't diamond," said study lead author Evan Smith, a geologist at the Gemological Institute of America in New York. "They are also relatively pure, which means most of these diamonds are made just of carbon atoms, unlike a lot of other diamonds, which contain nitrogen atoms here and there substituting for their carbon atoms."

In addition, when the biggest diamonds are in their rough, unpolished state, "they're irregular in shape, like a lollipop that's been in someone's mouth for a while, instead of the nice, symmetrical crystals one often thinks of with diamonds," Smith told Live Science.

These differences led scientists to speculate that large diamonds might form in different ways from smaller, more common diamonds. However, the world's biggest gem-quality diamonds "are worth so much money that it's very difficult to get access to them for research," Smith said. This has stymied studies that might solve the mystery of these large gems' origins, he explained.

Now, Smith and his colleagues have analyzed 42 finished specimens of such jewels that were each loaned to the researchers for a few hours at a time. In addition, the scientists examined two unfinished samples and nine so-called "offcuts," the pieces left over after a jewel's facets are cut and polished for maximum sparkle.

The researchers detected tiny metallic grains trapped inside these samples. The inclusions consisted of solidified mixtures of iron, nickel, carbon and sulfur, a combination never seen in common diamonds, said study co-author Steven Shirey, a geochemist at the Carnegie Institution for Science in Washington, D.C. The scientists also detected traces of methane and hydrogen in the thin spaces between these inclusions and the encasing diamond.

The metallic grains are evidence that massive diamonds likely have unusual origins, the researchers said. The chemistry of these metal inclusions suggests that large diamonds crystallize from pockets of metallic liquid. In contrast, other diamonds likely grow from a chemical soup loaded with carbon, oxygen and hydrogen, Smith said.

A number of the samples the researchers examined also possessed silicon-bearing mineral inclusions that form at the high pressures found at extreme depths, the scientists said. Researchers estimated that large diamonds are "superdeep" gems that likely form at depths of about 254 to 410 miles (410 to 660 kilometers). In comparison, previous research suggested that most other gem diamonds form at depths of just 93 to 124 miles (150 to 200 km).

These findings provide direct evidence of long-suspected, theoretically predicted chemical reactions in Earth's mantle that create pockets of metallic iron-nickel alloy, Smith said. Most of the iron and nickel in Earth's mantle, in contrast, is usually bound to oxygen or another chemical, he explained.

Although large diamonds and more common diamonds are sometimes found together, that does not mean they formed together, Shirey told Live Science. Instead, the same magma that flows upward to bring large diamonds to the surface can also drag up smaller diamonds that formed at shallower depths, he said.

These findings should not be taken to suggest "that there is an ocean of liquid metal deep in the Earth's mantle," Smith said. The liquid metal likely comes only in pockets "limited to perhaps fist-sized, if I were to guess, that are peppered throughout the mantle," he added.

"There's not a lot of this metallic iron — just about 1 percent or so of the mantle," Smith said. "Still, it changes the way we have to think about the deeper Earth, because elements like carbon dissolve well in metallic iron. This means the presence of this metal can impact the cycling of carbon, nitrogen and hydrogen from the deep Earth to the surface, from the Earth's mantle to where we live."

Future research could investigate what other elements are in these large diamonds or their offcuts, and what isotopes are included, Smith said.

"That might help shed light on the origin of this metal. Where does it come from, how does it form, what lifetime does it have, what processes does it participate in," he said.

The scientists detailed their findings online today (Dec. 15) in the journal Science.