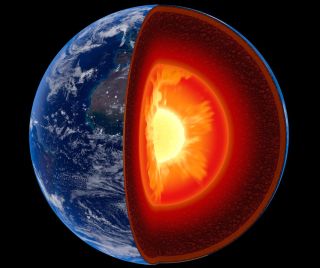 Scientists suspect that chunks from the bottom of the North American tectonic plate, which is the upper portion of the mantle, are peeling off and sinking. Replacing the resulting void is gooey material from the asthenosphere.
(Image: © Johan Swanepoel / Shutterstock.com)

An odd phenomenon may explain why the Southeastern United States has experienced recent earthquakes, even though the region sits snugly in the middle of a tectonic plate and not at the edges, where all the ground-shaking action usually happens.

This seismicity — or relatively frequent earthquakes — may be the result of areas along the bottom of the North American tectonic plate peeling off, the researchers said. And this peeling motion is likely to continue, leading to more earthquakes in the future, like the 2011 magnitude-5.8 temblor that shook the nation's capital. [Image Gallery: This Millennium's Destructive Earthquakes]

To figure out the cause of these earthquakes, Berk Biryol, a seismologist at UNC Chapel Hill, and colleagues created 3D images of the uppermost part of Earth's mantle, which is just below the crust and comprises the bottom of a tectonic plate. These tectonic plates scoot around atop a layer of warm, viscous fluid called the asthenosphere.

The resulting X-ray images revealed that the plate's thickness in the southeast United States was uneven, with thick regions of dense, old rock combined with thinner areas composed of younger rocks that were also less dense.

Here's what the researchers think caused the wonkiness: Over time, as new material was added to the plate and parts of the plate were pulled apart, areas of higher density formed. Gravity would have pulled down the denser areas into the mantle, and at some point chunks would have broken off to sink into the gooey asthenosphere below, the researchers speculated.

At the same time, to fill the void left by the chunks peeling off from the bottom of the plate, the lighter material in the asthenosphere would have moved up to fill in the space. That buoyant material then would have cooled to become the thinner, younger section of the plate.

Where parts of the plate broke off or peeled, it became thinner and more prone to slip along fault lines, thus causing seismic activity. Biryol estimates that this activity has occurred for the past 65 million years or so.

"These events, usually, when they occur, they occur over long periods of time. The geological time scale is millions of years," Biryol said.

While the research looks only at what has occurred in the past, and not what seismic activity there may be in the future, Biryol said people living in the Southeast don't need earthquake preparedness kits just yet.

"I don't think things will be changing in the future, at least not in our lifetimes or our grandchildren's grandchildren's life," Biryol told Live Science. "Geological processes take place over long periods of time and nothing will change dramatically overnight."