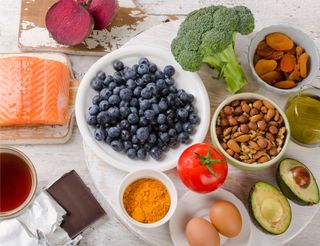 The MIND diet, as the name implies, is designed to promote a healthy mind and lower the risk of Alzheimer's disease. It is a mash-up of the Mediterranean diet and the DASH diet — two diets that have been found to have several health benefits.

MIND stands for Mediterranean-DASH Intervention for Neurodegenerative Delay. It was developed by a nutritional epidemiologist, Martha Clare Morris, at Rush University Medical Center through a study that was funded by the National Institute on Aging. Her goal was to lower the risk of Alzheimer's disease by promoting a diet consisting of brain-healthy foods.

The Mediterranean diet focuses on eating foods that are as natural as possible, while limiting unhealthy fats and red meat. The DASH (Dietary Approaches to Stop Hypertension) diet, as its name suggests, is aimed at helping to ease hypertension. It focuses on helping people to eat foods that can lower their sodium intake and blood pressure.

Morris told Live Science in a 2015 article that the researchers focused on this mix of two-well-known, healthy diets because it would be easy for Americans to follow. The MIND diet recommends eating 10 foods daily and avoiding five types of foods. The healthy-food group contains:

The five unhealthy foods are:

The rules of the diet are:

The researchers' main goal in creating the MIND diet was to reduce the risk of Alzheimer's disease (AD). According the Alzheimer's Foundation of America, it is estimated that about a half-million Americans younger than age 65 have some form of dementia, including Alzheimer's disease.

Morris and her team conducted studies of the MIND diet for nearly a decade, working with a group of 923 seniors. The results showed that the diet lowered the risk of Alzheimer's by as much as 53 percent in participants who meticulously adhered to the diet. It also helped 35 percent of the seniors who followed the diet moderately well, according to Rush University Medical Center.

The study also found that the longer a person followed the MIND diet, the better protected the individual was from developing Alzheimer's. The results of the study were published in March 2015, in the journal Alzheimer's & Dementia: The Journal of the Alzheimer's Association.

In another study, Morris' team conducted a head-to-head comparison of the MIND diet with the DASH and Mediterranean diets. The results that they obtained with the other two diets were similar to those they found with the MIND diet alone. A high adherence to the diets reduced the risk of Alzheimer's by 39 percent among those who followed the DASH diet and 54 percent among those who followed the Mediterranean diet, according to Rush University Medical Center. However, the participants obtained very little benefit from the two other diets if their adherence to them could be termed moderate rather than strict.

"One of the more exciting things about this is that people who adhered even moderately to the MIND diet had a reduction in their risk for AD," Morris said in a Rush University press release. "I think that will motivate people."

In various studies, the Mediterranean diet and the DASH diet have each been found to have health benefits in other areas as well. For example, people in one study who followed the DASH diet experienced a decrease in their blood sugar levels over a three-month period. Researchers in that study thought that the decrease was due to the higher consumption of probiotics than the diet prescribed. According to the Mayo Clinic, the DASH diet may also help reduce blood pressure by a few points in just two weeks, and systolic blood pressure could be reduced eight to 14 points, over time.

Another study, which was published in April 2010, found that the Mediterranean diet helped dieters lose weight and lower cholesterol, triglycerides and blood pressure. And a study of 780 male firefighters that was conducted by the Harvard School of Public Health and Cambridge Health Alliance also found that a Mediterranean-style diet was associated with lower risk factors for cardiovascular disease.

Live Science asked Dana Hunnes, senior dietitian at Ronald Reagan UCLA Medical Center and an adjunct assistant professor at the UCLA Fielding School of Public Health, to weigh in on the risks that may be associated with the MIND diet. "The Mediterranean and DASH diets are very healthy diets in general," said Hunnes. "They are extremely high in plant-based foods: fruits, vegetables, plant-based proteins (nuts, seeds, legumes). They are also very high in potassium and magnesium, two electrolytes/minerals we don't typically get enough of through diet.

"When it comes to eating fish and fish products, which the Mediterranean diet recommends more of, we need to be careful about some of the potential pollutants and toxins that end up in fish, including mercury and plastic residues. More and more, plastic residues, BPA — other persistent pollutants including DDT — and mercury are found in fish, Hunnes said. "So, if you eat fish, it's a good idea to aim low in the food chain and look for sustainably fished (line and pole caught) products."

"In general though, these are healthy eating patterns that are high in produce, low in saturated fat and good for human health and even the environment."

As with any diet, consult with a doctor before starting any new diet plan.