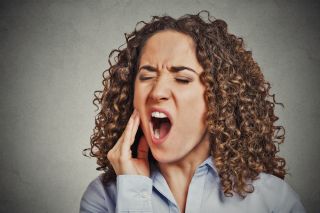 That gnawing, throbbing pain, the sharp jolt from a cup of hot coffee — almost everyone alive today has experienced the intense pain of a toothache.

But why exactly do we get toothaches?

In short, it is because, unlike hair or nails, teeth are made up of living tissue, said Christine Wall, an evolutionary anthropologist at Duke University who studies the evolution of teeth. Pain is the brain's way of knowing something has gone wrong in the tissue, she said.

"Under the cap of enamel, there are two other layers that are living," Wall told Live Science.

Those living tissues are threaded with nerves that send signals to the brain, when encountering hot and cold foods, or when experiencing forces so high that a tooth could break, Wall said. [Chew on This: 8 Foods for Healthy Teeth]

Teeth are made up of several layers: The outer, hard surface, called enamel, is nonliving, but the inner portion of the tooth is made up of hard, bony cells called dentin. Below that, the pulp — soft tissue filled with blood vessels and nerves — anchors the root of the tooth into the gum and extends from the tooth crown to the root.

Cavities, or holes that occur when the enamel gets eroded, are the likeliest culprits in tooth pain. Carbohydrates, especially from highly processed, sugary foods, are gobbled up by the bacteria that form plaque on teeth.

"The metabolic waste from the plaque bacteria is what rots the teeth," said Peter Ungar, a dental anthropologist at the University of Arkansas, and the author of the forthcoming book "Evolution's Bite" (Princeton University Press).

Once the enamel erodes, the exposed dentin registers pain in response to heat, cold and pressure. If bacteria invade the pulp cavity, they can also cause inflammation and infection. Nerves in the cavity will scream with every sip of hot coffee, every bite of cold ice cream, and will often require a root canal, which scoops out the inflamed pulp and replaces it with a rubbery material, according to the American Association of Endodontics (AAE). Cracked teeth can also cause pain when chewing as the outer tooth fragments jostle against the pulp, irritating the sensitive inner portion of the tooth, according to the AAE.

Gum disease can also cause pain that mimics tooth pain. Gum disease occurs when those bacteria slip under the gum line and the immune system is mobilized to kill them. The body gets confused when distinguishing between the gum tissue and the plaque bacteria, leading it to attack the body's own tissue, Ungar said.

"Gum disease is the No. 1 autoimmune disease in the world," Ungar said.

Gum disease can also cause the gums to recede, which exposes a small amount of the tooth's root and makes people momentarily sensitive to heat or cold, according to the AAE. Crowns that are too thick can also cause pain as people bite down because they may either press against the gum or alter the force experienced in the tooth, according to the AAE.

While most people know the feeling of a toothache, it may not have been a routine part of our evolutionary past, Ungar said.

For instance, fossils of Homo erectus, Neanderthals and prehistoric humans show relatively little tooth decay. Even nonhuman primates probably weren't as prone to toothaches as modern people. Rates of tooth decay in modern humans rose after the agricultural revolution and skyrocketed in the 17th century, with the advent of highly refined carbohydrates in the diet, Ungar said.

Though some fossils do show signs of tooth decay, "the rates are way, way, way lower, and we typically see it less frequently in hunters and gatherers, at least those that don't consume sugar-rich, or carb-heavy diets," Ungar said.

However, Ungar's most recent work has shown that the Hadza, a hunter-gatherer group in Africa, actually has a high rate of tooth decay, likely thanks to their habit of chewing on honeycombs and smoking.

Animals more distantly related to humans also may not feel chronic tooth pain often. Unlike mammals, which have just one set of permanent teeth, reptiles such as crocodiles can regrow teeth when they lose them, Wall said.

Mammals may also be more aware of their teeth, which could affect their experience of pain. Mammals engage in extensive "mastication" — essentially, chewing before swallowing, so they need to have exquisitely precise understanding of where the teeth are at any time. In turn, this requires more complex networks in the brain to interpret nerve signals from the teeth, Wall said.

"This is a system that needs constant feedback. Every time you chew you change the material properties of the food," Wall said. "You need to know: If I chew with the same force in the next chewing cycle, is that going to be too much?"

And because it's unlikely that our ancient ancestors were gulping down lattes or eating very cold foods, the tooth's sensitivity to heat and cold may simply be a byproduct of the tooth's ability to sense pressures and the flow of fluids, Wall speculated.

Whatever the origins of tooth pain in humans' evolutionary past, the remedy in modern times is simple: Avoid sugary or acidic foods, brush and floss teeth regularly, and get regular dental checkups to prevent the buildup of plaque, Ungar said.