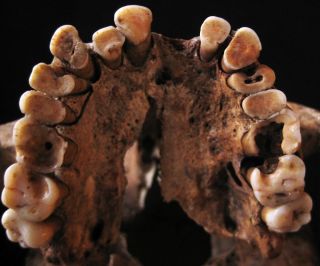 The teeth from skeletons unearthed in the Grotte des Pigeons cave in Morocco reveal evidence of extensive tooth decay and other dental problems, likely a result of their acorn-rich diet.
(Image: © Isabelle De Groote)

Ancient hunter-gatherers from the area that is now Morocco had cavities and missing teeth, a new study finds.

The rotten teeth on the ancient skeletons, which date back to about 15,000 years ago, probably resulted from a carbohydrate-rich diet full of acorns, according to the study, described today (Jan. 6) in the journal Proceedings of the National Academy of Sciences.

The findings show that at least some ancient populations were loading up on carbs thousands of years before the cultivation of grain took hold, said study co-author Louise Humphrey, a paleobiologist at the Natural History Museum in London. [The 10 Biggest Mysteries of the First Humans]

The skeletal remains of the hunter-gatherers were found in a large cave known as Grotte des Pigeons, in northern Morocco. Ochre-stained beads and other artifacts have shown that humans occupied the cave intermittently from at least 80,000 years ago till about 10,000 years ago, with people living in the front of the cave and burying their dead in the back.

Though archaeologists have known of the cave for about a century and had already excavated about 100 burials, in 2004, Humphrey and her colleagues found a new patch of 14 burials tucked into the back of the cave.

The researchers combined those finds with cave skeletons that were already in museum collections, analyzing 52 sets of adult teeth that date to between 15,000 and 13,900 years ago.

The hunter-gatherers did not have good oral hygiene. Half of the teeth showed evidence of severe tooth decay, and only three hunter-gatherers had no cavities. The ancient people also had cavities and abscesses that ate holes through their jaws, and 90 percent of the skeletons were missing incisors, apparently because of a ritual removal process.

Analysis of sediments from the front of the cave revealed the ancient people feasted on snails, pine nuts and, crucially, carbohydrate-rich acorns that might have tasted a bit like sweet chestnuts, Humphrey said. The team also found evidence of grasses likely used to make baskets — perhaps to store those acorns.

These bacteria produce acid as a byproduct of breaking down sugars. This acid then attacks tooth enamel and leads to cavities, Peter S. Ungar, an anthropologist at the University of Arkansas who was not involved in the study, wrote in an email.

Most scientists believe that hunter-gatherers ate a diet low in carbohydrates and rich in protein, and that it was only during the agricultural revolution that carbohydrate consumption increased.

But the new findings suggest humanity's sweet tooth may be much older than that.

For instance, new evidence has revealed that other Paleolithic communities "ate a range of starchy and fat-rich seeds and nuts, as well as berries," Marijke van der Veen, an archaeologist at the University of Leicester who was not involved in the study, wrote in an email to LiveScience.

Still, the carb-loading cave dwellers were probably the exception, not the rule.

"While about 90 percent of adults in the U.S. suffer from cavities, little more than a handful of early human ancestor teeth have them," Ungar told LiveScience. In contrast, less than 2 percent of Stone Age foragers had cavities, he said.

"This study, and others like it, make clear the fact that our oral environments are not those to which our teeth initially evolved," Ungar said.

Editor's Note: This story was corrected to reflect that the beads found in the cave were ochre-stained, not oak-stained, and to clarify that the pine nuts were not fermented.