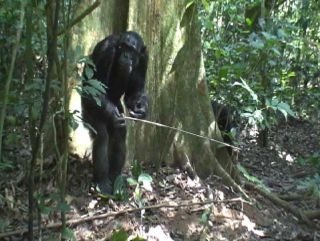 These findings are further evidence suggesting our closest living relatives can develop beyond the fairly simple expectations that even researchers have of them. The primates may foster communities that pass on relatively complex ideas over generations much like human cultures, the scientists say.

Researchers already knew that chimpanzees use tools when preying on insects or rummaging for honey. However, the variety of techniques the apes have used has perplexed scientists for decades.

"In other studies based across Africa, chimpanzees have been seen to prey on army ants both with and without tools, and it was inexplicable why some chimpanzees used different techniques to gather the same prey,"  explained researcher Crickette Sanz, a biological anthropologist at Washington University in St. Louis.

To better understand chimpanzee tool use, researchers from the Goualougo Triangle Ape Project spent a total of more than nine years investigating several communities of the apes throughout an 146 square mile area in Nouabalé-Ndoki National Park in the Republic of Congo.

"Our main difficulties were getting enough observations of apes in a habitat with dense vegetation, where one is encountering gorillas and elephants on a daily basis who force you to take a detour during your follow of chimpanzees," said researcher David Morgan, a conservation biologist at Lincoln Park Zoo in Chicago.

The scientists recovered 1,060 tools and collected 25 video recordings of chimpanzees using them to forage for army ants.

{{ video="LS_090909_chimp-tools" title="Chimp's Tool Box Shows Deep Thought" caption="An adult male chimp uses two tools to get a meal of ants. The behavior may be passed down like culture among humans. Credit: Goualougo Triangle Ape Project, Republic of the Congo." }}

"Our study site was the first to use remote video cameras to study chimpanzee behavior, and it has been shown to be a very effective tool for observing apes," Morgan explained.

Unlike other instances of chimp foraging of ants, these apes regularly used more than one implement to root out the insects. On average, tools were found in sets of three or four, although chimps assembled as many as 18 together.

Ant-dipping probes were the most commonly observed tools employed to catch army ants. The chimpanzee inserted these probes — wands each made of a slender, flexible herbaceous plant stem — into a nest or column of ants and gathered the insects that streamed up the tool. Another implement they used were perforating tools — longer, thicker implements made from woody saplings used to open nests so the chimpanzee can gather the ants within.

One possibility behind the use of several kinds of tools here was that different ants required specific implements. There were two kinds of army ants the apes targeted — "epigaeic" and "intermediate." Epigaeic ants have longer legs and mandibles, and so can run faster and can inflict a more painful bite. They forage on the ground and up in the vegetation in large swarms, and when disturbed the workers counterattack. Intermediate species, on the other hand, forage only in the leaf litter and withdraw into underground tunnels or into the leaf litter when disturbed.

However, the researchers found Congo apes used both kinds of tools on ant species that other chimpanzee populations used just one kind of tool on. So if different kinds of ants were not responsible for the variety of techniques chimps used to gather the insects across of continent, what did explain this diversity?

"We're seeing tool sets here in Central Africa with these chimpanzees but we're not typically seeing tool sets at other sites," Sanz said. "So there may be some aspects of social learning going on."

In other words, the differences between communities may stem from the fact that one site developed an innovation and passed it on socially while others did not. The variety seen in chimp tool use with ants may reflect the existence of multiple diverse cultures, just as societies differ in practices across humans.

Chimpanzees that harvest ants simply by raking a nest open with their hands can trigger a massive counterattack from the ants. This leads not only in bites but can provoke the ants to migrate and build a new nest at a different location. However, by using the perforation tool to lure the ants out before using the dipping tool to gather them up, the apes not only reduce the ant's aggressive behavior but may also be sustainably harvesting the, as the ants will stay in that location, allowing the chimpanzees to revisit this renewable source of food.

"People have fairly simplistic ideas of what chimpanzees can do, which reflects on our understanding of what the last common ancestor between humans and chimpanzees can do, and we're finding that wild chimpanzees have all different capacities, and some of them are pretty darn clever in the wild," Sanz told LiveScience. "Although some skeptics may say that the behavior is individually innovated, it is difficult to imagine that every single chimpanzee was so clever as to develop tool sets for each tool using situation that we have observed in the Congo."

These findings suggest much remains to be discovered about the variety and complexity of behaviors and mental abilities of wild chimpanzees, findings that could shed light on the evolution of humans, the researchers explained.

"Humans are extraordinary tool users — understanding the tool using capabilities of wild chimpanzees can provide insights into the evolutionary roots of these behaviors," Sanz said. "Our knowledge of the technological skills of our last common ancestors is limited to the stone tools which they left behind. In chimpanzees, we have a living primate model who can show us how such technology is invented, shared between group members, and preserved over generations."

The scientists cautioned that such behaviors and others could be lost due to many threats that jeopardize the long-term survival of these chimpanzees.

"Their habitat is being logged and converted for agriculture, the apes themselves are being hunted for food, and disease epidemics are repeatedly emerging in the Congo Basin," Morgan said. "We can not allow our closest living relatives to approach any closer to the brink of extinction, especially when they provide the opportunity to learn about our shared past."

The scientists detailed their findings September 2 in the American Journal of Primatology.