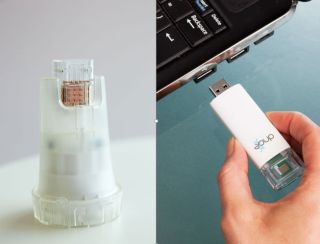 A new technology that fits on a USB stick can be used to test for levels of HIV in people's blood.
(Image: © Imperial College London/DNA Electronics )

A new technology that fits on a USB stick can be used to test for levels of HIV in people's blood, which could aid in treatment of the disease in developing countries, according to a new study.

The device has a chip that uses just a drop of blood to detect HIV levels, the researchers said. It creates an electrical signal that is sent to a USB stick, which can then be read by a computer.

Current tests for HIV levels can take at least three days and require blood to be sent to a laboratory, which can be very difficult in some parts of the world, the researchers in the new study said. But the new device is portable, and the test takes less than 30 minutes.

"Monitoring viral load is crucial to the success of HIV treatment," study co-author Dr. Graham Cooke, of the Department of Medicine at Imperial College London, said in a statement. "At the moment, testing often requires costly and complex equipment that can take a couple of days to produce a result. We have taken the job done by this equipment, which is the size of a large photocopier, and shrunk it down to a USB chip," Cooke said. [6 Superbugs to Watch Out For]

Testing for HIV levels is also a way for doctors to check if patients are taking their HIV medications. Stopping these medications contributes to the development of the virus's drug resistance, the researchers said.

To use the device, a drop of blood from a patient with HIV is placed on a spot on the chip. If HIV is present, it will trigger a change in acidity, and this change is transformed into an electrical signal that is sent to the USB stick, the researchers said.

In the study, the researchers tested about 990 blood samples, and the test was up to 95 percent accurate in detecting HIV levels. The average time for a result was about 20 minutes.

However, the device will need to be further developed before it can be used by doctors and their patients, the researchers said.

The device was developed in conjunction with the company DNA Electronics, which has patents on the technology. The study is published today (Nov. 10) in the journal Scientific Reports.