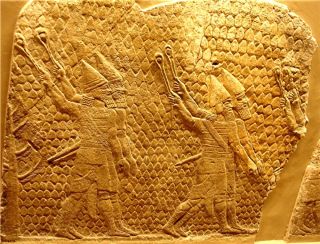 Dated from the beginning of the seventh century B.C., it shows Assyrian slingers in action at a siege of the Israelite city of Lachish in 710 B.C.
(Image: © British Museum)

The Assyrians are a people who have lived in the Middle East since ancient times and today can be found all over the world.

In ancient times their civilization was centered at the city of Assur (also called Ashur), the ruins of which are located in what is now northern Iraq. The city had a god that was also called Assur or Ashur. The territory that the Assyrians controlled could be vast, stretching at times from southern Iraq to the Mediterranean Coast.

Modern-day scholars often divide Assyrian history into three periods: the Old Assyrian, Middle Assyrian and Neo-Assyrian periods. The timespan that each period covers is a source of debate among scholars.

The "Old Assyrian" period generally refers to the time after Assyria first gained independence around 4,000 years ago.

Ancient texts indicate that Assyria's size and power were limited in the period after it gained independence. Its early rulers didn't refer to themselves as a "king" in their inscriptions. Instead they called themselves a "vicegerent" (a word that can mean "governor") of the god Ashur.

All pretense of modesty came to an end when a ruler named "Shamshi-Adad" (sometimes spelled Samsi-Adad) conquered, or otherwise took over, Assur, adding the city to an empire that controlled a vast swath of territory across modern-day Iraq and Syria. Study of inscriptions and archaeological remains indicate that Shamshi-Adad lived sometime around 3,800 years ago and based himself not at Assur but at a site in Syria which is now called "Tell Leilan." Rather than giving himself a modest title, as the earlier Assyrian rulers had done, he instead gave himself a title which scholars often translate as "king of the universe."

Shamshi-Adad's empire did not last for long. After his death the Babylonian Empire, led by Hammurabi, and a kingdom known as "Mittani" or "Hanigalbat" took over Shamshi-Adad's lands. Ancient records indicate that by 1500 B.C. the city of Assur was heavily influenced (if not directly controlled) by Mittani.

During the 14th century B.C., the Kingdom of Mitanni began to fade and those in charge of Assur began to assert the city's independence. Modern-day scholars often call this period of newfound Assyrian independence the "Middle Assyrian" period. At the start of this period Assur-Uballit I (reign ca. 1363-1328 B.C.) conquered territory near Assur and sought diplomatic recognition of his status from the kings of Egypt and Babylonia.

His successors further enlarged Assyrian territory. Adad-nirari I (reign ca. 1305-1274 B.C.) conquered Mitanni, taking over a kingdom that had ruled Assyria a century earlier. Adad-nirari I claimed that he "sowed salt over" the Mittani capital of Taidu and imposed labor obligations on the city's survivors. He constructed a palace over Taidu saying that he built it "from top to bottom" and deposited a stelae to mark his control of the city (translation by Albert Kirk Grayson). Adad-nirari I also used the title "king of the universe" to describe himself, a title which future Assyrian kings would also use.

The martial prowess and skill of the Assyrian kings continued to be emphasized in ancient inscriptions. Tiglath-Pileser I boasted in one inscription that "altogether I conquered 42 lands and their rulers" from across the Middle East, adding that he was a "valiant man" with an "unrivalled bow" who was such a good hunter that "I killed on foot 120 lions with my wildly vigorous assault" (translation by Albert Kirk Grayson).

However, inscriptions from Tiglath-Pileser's time, and that of his successors, point to problems Assyria was experiencing. Cities and civilizations across the Middle East were collapsing as a group of people from the Aegean arrived in the region, displacing local populations and collapsing trade networks. Assyrian records indicate that Tiglath-Pileser and his successors frequently fought against the Arameans, a group of people who were displaced or otherwise caught up in the chaos. In the two centuries following Tiglath-Pileser's conquest, Assyria's territory gradually contracted, the kingdom retaining control of Assur and territory near it. Assyria didn't expand again on a large scale until the 9th century B.C.

The time period from the 9th century B.C. (when the Assyrians started expanding again) to the destruction of the Assyrian Empire (before 600 B.C.) is often called the "Neo-Assyrian" period by modern-day scholars. During this time the territory that Assyria controlled reached its greatest geographic size.

Under Ashurnasirpal II (reign 883–859 B.C.) the Assyrians reconquered much of the territory that they had once controlled, again reaching the Mediterranean coast. In recognition of his achievements, Ashurnasirpal II constructed a new palace at the city of Nimrud and used this city, rather than Assur, to control Assyria. This policy of the king keeping himself some distance from Assur would be continued by future Assyrian kings. Sargon II (reign ca. 721-705 B.C.) founded a new city called Khorsabad, making it his capital, while Sennacherib (reign 704–681 B.C.) constructed a new palace at Nineveh, moving the Assyrian capital there.

Why Ashurnasirpal II and his successors chose to distance themselves from Assur, the traditional capital city of Assyria, is a source of debate among scholars.

Throughout Assyria's history the king wasn't the only one jockeying for power over the kingdom notes Karen Radner, a professor at Ludwig-Maximilians-Universität München. She said that at Assur the king had to deal with nobles and a council that may have been elected. Assur was also the home of the god Assur and, while that god was of great importance to the ancient Assyrians, he was not the only deity that the Assyrians venerated.

"The relocation of the seat of royal power must be primarily seen as a strategy to, firstly, emancipate the king from god Assur and, secondly, weaken the influence of the aristocratic and democratic powers whose influence were strongest and most visible in the city of Assur," wrote Radner in a paper published in the book "Revolt and Resistance in the Ancient Classical World and the Near East" (Brill, 2016).

Radner notes that in addition to a new capital Ashurnasirpal II and his successors also abolished hereditary governors, replacing them with individuals who owed their position to the king. The Assyrian kings also relied increasingly on eunuchs, men who had their genitals chopped off. As these men couldn't have offspring, any power a eunuch gained couldn't be passed on through a family line, minimizing the danger they posed to the king and his successors.

During the Neo-Assyrian period the kings of Assyria increased their kingdom's size to its largest yet. In addition to retaking Babylon, and part of modern-day Lebanon, the Assyrians launched a series of campaigns into modern-day Israel and Palestine, earning them numerous mentions in the Hebrew Bible.

Both Assyrian inscriptions and the Hebrew Bible say that the Assyrians, under King Sargon II (reign ca. 721-705 B.C.) completely destroyed Israel. Sargon II said in an inscription that he "conquered and sacked" all the towns and cities in Israel and "led away as booty 27,290 inhabitants." He also recruited charioteers from among the defeated Israeli forces (translation by Adolf Leo Oppenheim).

His successor Sennacherib (reign ca. 704-681 B.C.) turned his attention to Judah, conquering its cities and towns and laying siege to Jerusalem itself. However while accounts from both the Hebrew Bible and Assyrian inscriptions say that the siege took place, it's unclear exactly how the battle ended.

The Hebrew Bible said that the siege was a complete failure. It says that the Assyrians had to fight the Egyptians, something that caused the Assyrians to divert some of their forces away from Jerusalem. The remaining Assyrian forces were supposedly destroyed by divine intervention "the angel of the Lord went out and put to death a hundred and eighty-five thousand in the Assyrian camp. When the people got up the next morning — there were all the dead bodies!" (2 Kings 19:35 and Isaiah 37:36)

An Assyrian inscription says that Hezekiah, the king of Judah, was trapped in Jerusalem "like a bird in a cage." The inscription says that Sennacherib called off his army when Hezekiah agreed to pay tribute to the Assyrian king, the inscription saying that Hezekiah gave Sennacherib a vast amount of gold, silver, ivory, elephant hides and even his own daughters (translation by Adolf Leo Oppenheim). Regardless of what happened, the Assyrians did not conquer Jerusalem and the Kingdom of Judah continued on.

Assyria continued to expand west, invading Egypt during the rule of Esarhaddon (reign ca. 680–669 B.C.). The Egyptian pharaoh Taharqa was defeated in 671 B.C. and the Assyrians captured the Egyptian capital of Memphis. The Assyrians then tried to govern Egypt using a series of vassal rulers.

While the Assyrians had pushed far to the west trouble was brewing in the east. During the 7th century B.C. Assyrian rulers had to put down a series of rebellions in Babylonia. Meanwhile a group called the "Medes," based in what is now Iran, also launched attacks on Assyrian forces.

Under attack from two groups, while trying to maintain their holdings in the west, the Assyrian military came under pressure. The Babylonians became fully independent during the reign of the Babylonian King Nabopolassar (reign ca. 625–605 B.C).

In 612 B.C. the Median king Cyaxares (reign ca. 625–585 B.C.) launched a major attack on Nineveh, which the Assyrian king Sinsharishkun (reign ca. 622–612 B.C.) tried to stop. A Babylonian inscription said that the fight for Nineveh went on for a few months. "Three battles were fought" in that time, following which the Medians stormed the city itself. The city fell and was destroyed by the Median army who turned the city "into ruin hills and heaps of debris," (translation by CJ Gadd).

The Assyrians fought further battles but their military was gradually drained and their territory destroyed or taken over. It's not clear if Sinsharishkun died at Nineveh or sometime later in a future battle. By 600 B.C. the Assyrian kingdom had been completely destroyed.

Although many Assyrian cities were destroyed or badly damaged, some Assyrians survived the downfall. The survivors, and those descended from them, lived through a long line of rulers. In the period after the time of Christ, the Assyrians converted to Christianity, a religion which they have kept through present day.

Today, the Assyrian homeland is still in northern Iraq; however, the destruction brought about by the terrorist group ISIL (also known as ISIS or Daesh) has resulted in many Assyrians being killed or forced to flee. ISIL has also destroyed, looted or heavily damaged many Assyrian sites, including Nimrud.