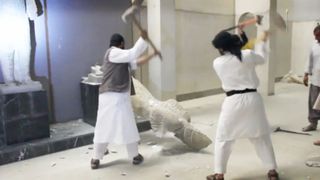 ISIS militants destroy two statues of kings from the ancient city of Hatra in the Mosul Museum.
(Image: © YouTube)

Already notorious for videos of beheadings and executions, the extremist group that calls itself the Islamic State, or ISIS, has recently taken aim at archaeological ruins and relics in attacks that international leaders say amount to a "war crime."

Last week, ISIS released a video of the group ransacking the Mosul Museum in northern Iraq. Yesterday (March 5), Iraq's Ministry of Culture announced that ISIS had razed one of the famous capitals of the Assyrian empire, the 3,300-year-old city of Nimrud, near the banks of the Tigris River.

"This is yet another attack against the Iraqi people, reminding us that nothing is safe from the cultural cleansing underway in the country: It targets human lives, minorities, and is marked by the systematic destruction of humanity's ancient heritage," Bokova said. She called on political and religious leaders to condemn the destruction, and added that she had alerted the U.N. Security Council and the prosecutor of the International Criminal Court.

The bulldozing of Nimrud was especially shocking because it is one of the most important archaeological sites not just in Mesopotamia, but the world, said Ihsan Fethi, director of the Iraqi Architects Society.

"It was a crime against anything any civilized person would believe," Fethi added.

Nimrud covers nearly 2 square miles (5 square kilometers) and has sprawling palaces, temples and a citadel. The city was built by the Assyrian king Shalmaneser I in the 13th century B.C. A few centuries later, it became the capital of the Neo-Assyrian Empire, considered by some scholars to be the first true empire in world history.

You hardly had to go to Nimrud to appreciate its architecture and artwork. Today, museums like the Louvre in Paris and the Metropolitan Museum of Art in New York display Nimrud's statues of human-headed winged beasts, known as lamassu, as well as intricately carved reliefs showing lions, kings, gods and scenes of battle that once decorated palace walls.

Nimrud has a long history of excavations by Western archaeologists, going back to the mid-19th century. Sir Austen Henry Layard brought reliefs from the ancient city to the British Museum and other collections in the late 1840s and 1850s. One hundred years later, another British archaeologist, Max Mallowan, directed excavations at Nimrud. (His wife, the mystery novelist Agatha Christie, often joined the expeditions.)

Still, Fethi estimated that only 15 to 20 percent of the city had been excavated, and the site possibly hides more discoveries, which, at least in the near future, have little chance of being explored.

Fethi worries that the next target could be the ancient city of Hatra — another UNESCO World Heritage Site that was founded in the third century B.C., some 70 miles (110 km) southwest of Mosul. (Those who don't know Hatra for its impressive temples and architecture might know the ancient city from its cameo in "The Exorcist.") [See Photos of Amazing UNESCO World Heritage Sites]

The events have been both heartbreaking and frustrating for archaeologists and cultural heritage specialists watching from afar.

"We can express outrage and highlight the enormous loss that's going on — and the significance of that loss — but beyond that, it's extremely difficult to do anything," said Paul Collins of the British Institute for the Study of Iraq.

For now, some experts are trying to at least take stock of what may have been lost.

Christopher Jones, a doctoral student who is studying the history of the ancient Near East at Columbia University, said he downloaded the video of ISIS pillaging the Mosul Museum last week and went through the footage bit by bit, taking screenshots and notes. On his blog, Gates of Nineveh, Jones published a two-part post describing the objects he could identify.

He had to turn to older images from inside the museum and obscure publications — older books and academic papers, mostly in Arabic — to piece together a picture of what was destroyed. Some of the objects that were smashed at the Mosul Museum were clearly replicas.

"You can tell from some of them by the way they break," Jones said. Plaster casts tend to shatter, while authentically ancient stone sculptures are much more durable when they're toppled over.

Some of the more dramatic scenes in the ISIS video seem to involve replicas or casts. In one part of the video, a plaster copy of a statue of Hercules is pushed to the floor, and it immediately smashes into thousands of little pieces, kicking up a cloud of white dust. In another scene, a sculpture of a face hanging on the wall of the museum's Hatra Hall falls to the floor in slow motion after a man in a purple polo shirt takes a sledgehammer to it. Jones spoke to Lucinda Dirven, an expert on Hatra, who thinks the face could be a plaster cast of one of the masks that was built into a wall at the ancient city.

That Hercules statue was listed as one of the four replicas in the Hatra Hall, according to a basic inventory of the Mosul Museum that was shared on the IraqCrisis cultural heritage mailing list. But there were 30 other objects from the same gallery listed as authentic, including four statues of kings from Hatra. All four of those statues seem to have been destroyed — a 15 percent loss of all existing statues of Hatrene kings, as just 27 were known, Jones said.

Besides the Hatra Hall, the Mosul Museum has two other galleries: one dedicated to Assyrian art with reliefs and statues from Nimrud and Nineveh (another ancient Assyrian capital) and an Islamic hall, which was not shown in the video.

That video also cut to footage taken beyond the walls of the museum, at Nineveh. It showed men using power tools to destroy the colossal lamassu that stood guard at the Nergal Gate Museum. The winged statues were among the few that hadn't already been shipped off to other museums.

"Those were some of the few lamassu that were still in situ," Jones said.