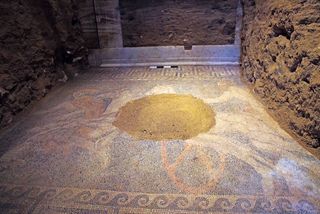 This colorful mosaic, showing Persephone's abduction by Hades, was uncovered at the Amphipolis tomb in Greek Macedonia.
(Image: © Greek Ministry of Culture)

Thanks to the careful work of archaeologists, we learned more in the past year about Stonehenge's hidden monuments, Richard III's gruesome death and King Tut's mummified erection. From the discovery of an ancient tomb in Greece to the first evidence of Neanderthal art, here are 10 of Live Science's favorite archaeology stories of 2014.

1. An Alexander the Great-era tomb at Amphipolis

Rarely do archaeological digs attract so much attention in real time. But at Amphipolis, an ancient coastal city in northern Greece, the discovery of a lavish 2,300-year-old tomb has created a national frenzy. In August, state archaeologists broke through the entrance of a huge burial mound that's been billed as the largest of its kind in the Greek world. (Its perimeter measures about 1,600 feet, or 490 meters.) [See Photos of the Ancient Tomb at Amphipolis]

Excavators found broken sphinxes, two female statues called caryatids, a remarkably intact mosaic floor and some skeletal material, which is awaiting analysis. It's still unclear who was buried inside the tomb, but some have speculated that it could be someone from Alexander the Great's inner circle.

Capping a four-year survey of the landscape around England's Stonehenge, researchers reported that they found signs of at least 17 previously unknown Neolithic shrines. The big announcement — which was accompanied by TV specials on the BBC and Smithsonian Channel — could change the way historians have thought of Stonehenge.

"Stonehenge is undoubtedly a major ritual monument, which people may have traveled considerable distances to come to, but it isn't just standing there by itself," project leader Vincent Gaffney, an archaeologist at the University of Birmingham, told Live Science in September. "It's part of a much more complex landscape with processional and ritual activities that go around it." [See Images of Hidden Stonehenge Monuments]

3. A shipwreck under the World Trade Center

In the summer of 2010, archaeologists in New York discovered a school-bus-size shipwreck in an unlikely place: the site of the World Trade Center, still under construction after the Sept. 11, 2001, terrorist attacks. This year, tree-ring researchers who were studying the ship's fragile timbers announced that they had uncovered new details about the vessel.

The ship was likely built in 1773, or soon after, in a small shipyard near Philadelphia, according to the study, which was published in the journal Tree-Ring Research. What's more, the ship's timbers may have originated from the same white oak forest where wood was harvested to build Philadelphia's Independence Hall, the researchers said.

Once lost to history, the skeleton of Britain's King Richard III was found under a parking lot in 2012, and since then, the monarch's remains have been a boon for scientists who study centuries-old DNA, diet and disease. Among this year's findings, scientists reported that they found a mitochondrial DNA match between Richard and two of his living relatives, offering further confirmation that the bones really belong to the king. A model of Richard's misshapen spine showed that he suffered from adolescent idiopathic scoliosis.

Isotopes locked in Richard's teeth and bones revealed that the king ate (and drank) quite well during his two years at the throne. And, after a much-delayed autopsy, researchers also determined this year that Richard likely died a quick death on the battlefield; they found two wounds on the back of Richard's skull that were likely candidates for the fatal blow.

At the bottom of an underwater cave called Hoyo Negro (Spanish for "Black Hole") in Mexico's Yucatan Peninsula, divers discovered a near-complete skeleton of a teenage girl. Dubbed "Naia," the girl was found alongside unlikely gravemates: saber-toothed cats, pumas, sloths and bears. Researchers think Naia and the animals likely fell to their deaths 12,000 to 13,000 years ago, before the pit filled with water when the world's glaciers started melting.

Scientists also found that DNA from Naia's remains resembled modern Native American DNA. The discovery, which was reported in May in the journal Science, could help solve the long-standing debate over the identity of the first Americans. [In Photos: Human Skeleton Sheds Light on First Americans]

The paralyzing political situation in Syria has become somewhat of a test for satellite archaeology. Shut out of the war-torn country, archaeologists have turned to aerial images to learn about the state of Syria's ancient ruins. So far, their findings have been grim.

Five of Syria's six UNESCO World Heritage sites show "significant damage," and some buildings are now "reduced to rubble," according to an analysis of satellite images by the nonprofit and nonpartisan American Association for the Advancement of Science (AAAS). Meanwhile, the American Schools for Oriental Research was given a $600,000 grant from the U.S. State Department to fund a Syrian Heritage Initiative for a year. At the organization's annual meeting last month in San Diego, researchers with the initiative reported that 63 of the 400 archaeological sites they analyzed exhibited war-related looting.

This story might be more of an "undiscovery." In September 2012, Harvard University divinity professor Karen King announced the sensational finding of a small papyrus fragment written in Coptic. The text contained references to a "Mary" and the translated line, "Jesus said to them, 'My wife, she will be able to be my disciple.'" The suggestion was that Mary Magdalene may have been Jesus' wife — or that some people in ancient times at least believed she was his wife.

Biblical scholars had aired their suspicions about the authenticity of the so-called "Gospel of Jesus' Wife" because of problematic features, such as bad handwriting and grammatical errors. And earlier this year, a Live Science investigation revealed that the papyrus has a flimsy provenance. The anonymous owner of the papyrus claims to have purchased the document from a now-deceased man whose family said he never collected antiquities. The text is looking more and more like a forgery.

The world's oldest known cheese was found this year, tucked away on the bodies of 3,800-year-old mummies in northwest China's Taklamakan Desert. Scholars had previously uncovered archaeological clues suggesting that cheese making began as early as the sixth millennium B.C., but actual samples of ancient cheese are hard to come by.

Archaeologists found clumps of a yellowish substance on the chests and necks of mummies during recent excavations in China's Xiaohe Cemetery. A chemical analysis showed that these blobs were really cheese. These dairy treats would have been nutritious, easily digestible and quite similar to yogurtlike kefir, according to the study in the Journal of Archaeological Science. The cheese was presumably left in the graves as a snack to be enjoyed in the afterlife.

Researchers have long noted several anomalies of King Tutankhamun's embalming. The young pharaoh was buried in a lavish tomb in Egypt's Valley of the Kings without a heart, an excessive amount of black oils and goolike resins were applied to his body, and his penis was mummified erect at a 90-degree angle. A recent study in the journal Études et Travaux suggests that King Tut's unusual burial was part of a deliberate effort to fight a religious revolution unleashed by his father.

King Tut's father, Akhenaten, is famous for trying to introduce monotheism to Egypt. He wanted religion to center on the worship of the Aten, the sun disc, and destroyed images of other gods. King Tut, meanwhile, was trying to bring back polytheism during his reign. To emphasize that return to tradition, Tut's embalmers may have tried to make the king look like Osiris, the Egyptian god of the underworld, who is often depicted with an erect penis to evoke his regenerative powers.

Sometimes, big discoveries come in small packages. This year, two separate studies of tiny, simple etchings cast doubt on whether modern humans are really the only Homo species to have created art. A geometric carving on a rock in the back of a cave in Gibraltar may have been created by Neanderthals, the closest known relatives of modern humans, some 40,000 years ago, according to one study in the journal Proceedings of the National Academy of Sciences. Researchers who tried to recreate the gridlike etching said this carving wasn't the accidental byproduct of butchery, but rather an intentional design.

Earlier this month, another group of scientists in Java, Indonesia, reported in the journal Nature that they found a series of slashes and an "M"-shaped zigzag" on a shell that's between 540,000 and 430,000 years old. They attributed the scribbles to Homo erectus, an ancestor of modern humans. In both cases, it's unclear what meaning (if any) the "artwork" held, but the studies suggest our human ancestors and extinct relatives were capable of abstract thinking.