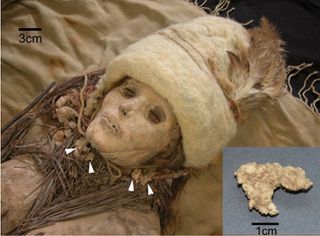 A mummy found with hunks of ancient cheese, shown in the inset.
(Image: © Y.Liu and Y.Yang)

Yellow chunks of the world's oldest "cheese" may have been discovered on the bodies of mummies buried in China's Taklamakan Desert.

The mummies, which are each about 3,800 years old, were buried with hunks of the dairy treat, presumably a tasty snack for the buried to enjoy in the afterlife. This particular cheese was also simple to make, nutritious and easily digestible, according to the study.

"Despite being extraordinary simple, it possessed the necessary qualities for supporting the economic expansion of ruminant animal herding into Eastern Eurasia," the authors write in the paper, which was published online Feb. 18 in the Journal of Archaeological Science.

Researchers have found hints of cheese making from as far back as the sixth millennium B.C., but samples of the ancient cheese itself have been elusive. Most evidence relied on residual fats found in pottery shards, but many of these traces had degraded over time or received only limited analysis. This made the evidence for ancient cheese circumstantial, the authors write.

Researchers unearthed the newly discovered cheese during excavations of the Xiaohe Cemetery, also known as Ordek's necropolis, between 2002 and 2004. The ancient necropolis was first discovered in a sand dune located by a dried-up riverbed in 1934. It harbors hundreds of mummies buried in large, wooden coffins that resembled upside-down boats, which were then covered with cowhide that sealed the coffins from the air. The dry air and salty soil had left many mummies and their accessories extraordinarily well preserved. [In Images: The Faces of Egyptian Mummies Revealed]

The research team found 0.4 inch to 0.8 inch (1 to 2 centimeters) clumps of a yellowish substance in several tombs, adorning the necks and chests of the mummies, which had Eurasian features.

A chemical analysis revealed that the ancient dairy product didn't require an enzyme, known as rennet, which is found in the guts of ruminants and is used to make hard cheeses such as cheddar.

Instead, makers likely fermented this cheese using microbes such as Lactobacillus and Saccharomycetaceae yeasts, which are commonly used to make the still-popular fermented dairy beverage known as kefir. The team also made their own homemade kefir, and found that the chemical and bacterial composition matched the snacks buried with the mummies.

The ancient cheese had less salt content than typical brined cheeses, which preserve better. This finding suggested the cheese was meant to be consumed on the spot, and was not created for long-distance trade.

The fermented treat may have provided probiotic benefits to the guts of these ancient people, and may even explain why herding became such a dominant way of life.

"The evidence of kefir dairy that occurred already at the Early Bronze Age helps [us] to understand why milking was spreading over Eastern Eurasia despite the lactose intolerance of the local population," the authors write in the paper.