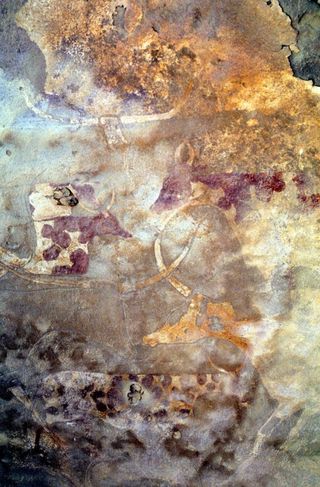 Colorful rock art of domesticated cattle decorates a wall at Wadi Imha in the Tadrart Acacus Mountains in the Libyan Sahara. Images like this reveal the importance of cattle to Neolithic African people.
(Image: © Roberto Ceccacci, © The Archaeological Mission in the Sahara, Sapienza University of Rome)

The sandy dunes of the Sahara may seem an unlikely place for a dairy farm, but about 7,000 years ago, herders tended and milked cattle in what is now desolate desert, new research shows.

About 10,000 years ago, the Sahara desert went through a phase called the Holocene African Humid Period. Fossilized bones show that by the sixth millennium B.C. (or about 7,000 years ago), cattle, sheep and goats roamed over green savanna, and rock art depicts cows with full udders. The occasional image even shows milking, said study researcher Julie Dunne, a doctoral student at the University of Bristol. But it's difficult to get a firm date for those images.

By analyzing pottery fragments, Dunne and her colleagues have now shown that these early herders were not only milking their livestock, but also processing that milk into products like yogurt, cheese and butter.

"The most exciting thing about this is that milk is one of the only foodstuffs that gives us carbohydrates, protein and fat," all in one substance, Dunne told LiveScience. "So it was incredibly beneficial for prehistoric people to use milk." [Top 10 Mysteries of the First Humans]

Dunne and her colleagues analyzed tiny fragments of pottery taken from the Takarkori rock shelter, a prehistoric dwelling in the Libyan Sahara. They ground up small pieces of the pottery, conducting chemical analyses to investigate the proteins and fats embedded in the shards. By doing so, the researchers could see what the pots once held.

They found evidence of a varied diet, with signs found for plant oils and animal fat. The most common fats were of animal origin, Dunne said, with some deriving from flesh and others from milk. The most dairy-fat rich pottery shards came from the same time periods when more cattle bones are found in the cave layers, the researchers reported today (June 20) in the journal Nature.

By looking at variations in the carbon molecules in these preserved fats, the researchers were able to get an idea of what kind of plants the cattle were eating. They found their diets varied between so-called C3, or woody plants, and C4 plants, which include grasses grains and dry-weather plants. (C3 and C4 refer to the type of photosynthesis these plants use.)

That fits with the archaeological understanding of this early herding civilization as moving between seasonal camps, Dunne said. [Album: Faces of a Threatened Tribe]

"It suggests that they were moving between summer and winter camps and eating different plants at one place than another, so this all ties together very nicely," she said.

Spread of milk and butter

No one has ever before looked for evidence of dairy farming in these herding tribes, Dunne said, but the new findings help explain how humans got their taste for milk. People first settled down to an agricultural lifestyle in the Near East about 8,000 or 9,000 years ago, she said. Soon after, they took up dairy farming. The milk habit then spread across Europe in fits and starts.

At the same time, though, people were also migrating from the Near East into what is now Egypt and other parts of Africa, Dunne said. This movement spread dairying to north Africans, who were previously settled hunter-gatherers and fishermen. As new immigrants moved in with cattle, these native people would have quickly seen the benefits of "marvelous big hunks of food on the hoof," Dunne said.

Humans had to evolve to match their new source of protein, however. Originally, mankind was lactose intolerant, meaning that milk drinking was an invitation for an upset stomach. Processing milk into yogurt and cheese would have helped, Dunne said, but humans also adapted: As dairying spread, so did genes that confer lactose tolerance.

"You're really seeing evolution in action over a very short timescale, just 1,000 to 2,000 years," Dunne said.

The researchers now plan to analyze more pottery samples from more northern African dwellings. The goal, Dunne said, is to get a better picture of how dairy — and cows — spread among the people of the continent.

Cattle "really played an enormous part in their ideology and their general day-to-day life," she said.