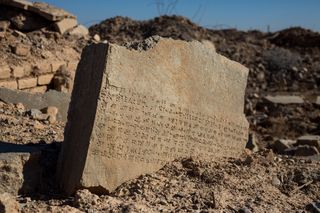 Though the terrorist group ISIL has destroyed much of the ancient city of Nimrud, some artifacts remain, including this inscription.
(Image: © Photo by John Beck)

A military offensive to take back the city of Mosul, Iraq, from the Islamic State group (also called ISIS) has also resulted in the retaking of several historic sites that ISIS destroyed and looted.

The offensive is being carried out by the Iraq military and the Peshmerga, which is a Kurdish force supported by Iraqi Kurdistan (an autonomous region of the country). Air strikes by a coalition of countries are supporting these ground troops. U.S. Special Forces are also on the ground and assisting in the fighting. The forces have retaken outlying areas of Mosul, and ground troops are making their way toward the center of the city.  [Photos: Restoring Life to Iraq's Ruined Artifacts]

As troops advance, they have retaken a number of historic sites, and reports are coming in about the sites' condition:

"Many fragments" of sculptures and royal inscriptions have been found and transported to the directorate of antiquities of Akre for conservation, said Dlshad Marf Zamua, a Kurdish archaeologist who is completing a doctorate at Leiden University in the Netherlands. A Kurdish language news reportshared images of a few of the fragments.

Marf Zamua, working as a Kurdish-English translator during the battle for Mosul, said that when the war is over he plans to visit Khorsabad and the remains of other ancient Assyrian cities.

Forces have also recently retaken the site of Mar Behnam, a Christian monastery built about 1,500 years ago, the Assyrian International News Agency reported. ISIS destroyed much of the monastery. Graffiti spray-painted by ISIS covers the surviving buildings, while the artwork and inscriptions inside of those buildings had been destroyed, the news agency reported.

"It's awful. It's disgusting," said Amir Harrak, an expert in Syriac (a dialect of Aramaic) at the University of Toronto. One of the last people to visit Mar Behnam, Harrak left the site just two months before ISIS captured it in June 2014. In destroying historic sites, ISIS has insulted Muslims, Christians and all Iraqis, said Harrak, who is a native of Mosul (he left in 1977).

Ashurnasirpal II (reign 883-859 B.C.) used the ancient city of Nimrud as the capital of Assyria, and he constructed a massive palace there. ISIS destroyed or looted much of the site, using bulldozers and dynamite. [Photos: New Archaeological Discoveries in Northern Iraq]

Iraq archaeologists have arrived on site and security has been arranged to prevent further destruction and looting. A forthcoming Live Science story will reveal some of the surviving inscriptions.