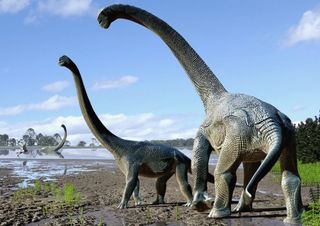 About 95 million years ago, a bus-size and scaly-skinned sauropod dinosaur with a long tail and even longer neck lumbered across what is now Queensland, Australia, a new study finds.

The hulking, 50-foot-long (15 meters) paleo-beast likely weighed up to 22 tons (20 tonnes) and sported hips that didn't quit, at a girth of some 5 feet (1.5 m) across. And the dinosaur likely ate supersize meals, using its large digestive system to extract nutrients from all kinds of plants, even tough ones, said the study's lead researcher Stephen Poropat, a palaeontologist and research associate at the Australian Age of Dinosaurs Museum of Natural History in Queensland, Australia.

The newly identified species of sauropod is one of the most complete sauropod skeletons ever found in Australia, Poropat said. It's named Savannasaurus elliottorum, for the savannah where it was found and for David Elliott, the first person to find dinosaur bones at the site. [See Images of the Enormous, Newly Identified Australian Sauropod]

"To have had the privilege of describing the first sauropod braincase ever found in Australia has been very humbling," Poropat told Live Science in an email. He explained that sauropod heads are an unusual find because "the bones of the skull were not solidly fused together, meaning that sauropod skulls had a tendency to 'explode' once their owners had died, and they also seem to have detached quite easily from sauropod necks — perhaps [carnivorous bipedal] theropods liked to eat them."

One day in 2005, Elliott, who had previously founded the Australian Age of Dinosaurs museum with his wife, Judy, was tending to his sheep when he noticed a few fossils on the ground on his property in Queensland. At first, Elliott thought two of the bones belonged to a theropod dinosaur. But Judy found otherwise when she clicked the two end pieces together, revealing that the fossils were actually the toe bone of a sauropod, Poropat said.

Curious to learn more, David, Judy and a team from the Queensland Museum returned to the area — nicknamed the Ho-Hum site — later that year.

"What they found was stunning: a huge siltstone concretion, filled with dinosaur bones," Poropat said. "It was too big to be extracted whole, so they decided to break it up into hundreds of smaller, more manageable pieces."

It took nearly 10 years for paleontologists to fully prepare the bones, but it was well worth the effort, Poropat said.

The newfound sauropod, dubbed Wade, would have stood almost 10 feet (3 m) tall at its shoulders, and walked on all fours, equipped with five toes on each foot.

Both S. elliottorum and D. matildae are closely related to titanosaurs, whose bones have been found in South America and Asia. However, little is known about when sauropods made it to Australia, Poropat said.

According to an anatomical analysis, S. elliottorum and D. matildae's ancestors hailed from South America, Poropat said. He and his colleagues suspect that the sauropod's ancestors likely trudged from there to Australia via Antarctica, which was connected to both continents during the Cretaceous Period, Poropat said.

"It is likely that titanosaurs were not able to enter Australia until approximately 105 million years ago, because cool (but not freezing) conditions prevailed in Antarctica from approximately 120 [million to] 105 million years ago," Poropat said. "Although they might have been 'warm-blooded,' sauropods had long necks and tails through which they might have lost a lot of heat when the weather was cold."

The study was published online today (Oct. 20) in the journal Scientific Reports.