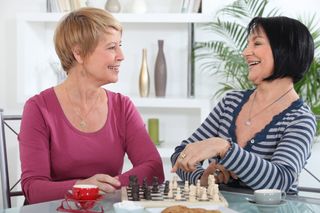 The reason one woman gets hot flashes while another woman stays cool and comfortable through menopause may come down to differences between their genes, a new study finds.

Researchers have identified several genetic variations that increase the likelihood that a woman will experience hot flashes and night sweats during or after menopause, the study said.

More than 70 percent of women experience hot flashes and night sweats, according to the study, published today (Oct. 19) in the journal Menopause. [5 Myths About Women's Bodies]

"If we can better identify what genetic variants are associated with hot flashes, this could lead to novel treatments to relieve them," Dr. Carolyn Crandall, a professor of medicine at the David Geffen School of Medicine at the University of California, Los Angeles, and the lead author of the study, said in a statement.

Currently, the most effective way to treat hot flashes is to take estrogen, according to the Mayo Clinic. However, this treatment can increase of a woman's risk of other health problems, the Mayo Clinic says.

In the new study, the researchers looked at genetic data for more than 17,600 women ages 50 to 79 who were enrolled in the Women's Health Initiative, an ongoing study that began in 1991 and is looking at the most common causes of death, disability and poor quality of life in postmenopausal women. All of the women in the study provided DNA samples and also responded to questions about whether or not they had hot flashes or night sweats.

The researchers looked at more than 11 million gene variations in the women, finding that 14 of these variations were associated with hot flashes, according to the study.

The locations of these gene variations may offer insights into why hot flashes occur, the researchers wrote. All of the variations were found in a certain region of chromosome 4, the study said. This region tells the body to produce a type of receptor that's located in the brain and that plays a role in the release of estrogen, the study said.

Previous studies have linked mutations in the gene for this particular receptor to infertility, but this is the first study in humans to link the receptor to hot flashes, the researchers wrote.

There are some limitations to the study. It's possible, for example, that environmental factors may also play a role in determining which women experience hot flashes, Crandall said. In addition, there could be other rare gene variations that play a role but that the study did not detect, she said.

Crandall noted, however, that the gene variations were associated with hot flashes in women of several different ethnicities, including European-American, African-American and Hispanic-American, and that these variation appeared to  be important even when other factors that can influence hot flashes were factored in.