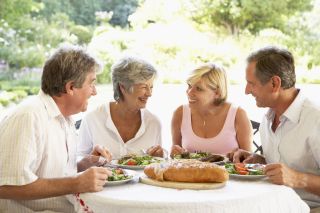 Losing weight by eating a low-fat diet may reduce menopausal women's symptoms of hot flashes and night sweats, according to a new study.

The researchers studied 17,473 women and found that those who lost either 10 pounds or 10 percent of their body weight were 89 percent less likely to have hot flashes or night sweats one year after the weight loss, compared with women who didn't lose any weight. Women who lost more than 22 pounds experienced an elimination of their symptoms altogether, the study found.

The women ate a diet of low-fat, high-fiber, whole-grain foods, and were not taking hormone therapy.

Because fat insulates the body, increased body fat may worsen hot flashes and night sweats, which are caused by a complex interaction between hormones, brain chemicals and sweat glands during menopause. The less fat a person has, the more easily the body can dissipate heat, Caan said.

The researchers noted that two-thirds of people in the U.S. are overweight, and according to Axelrod, could benefit from weight loss. It’s been shown that women who are overweight experience more severe hot flashes, Axelrod added.

It was not only the amount of weight loss that made a difference among the women in the study — the low-fat diet itself seemed to have an effect.

The results of the study are impressive due to the large sample size, according to Dr. Deborah Axelrod, director of Clinical Breast Programs and Service at New York University Langone Medical Center, who was not involved in the study. But Axelrod also noted that of the women involved, only 26 percent reported having any menopausal symptoms at all, only 1 percent reported severe symptoms.

Previous research has linked higher body weight and weight gain to worse menopausal symptoms; this is the first study to suggest that eating a healthy diet and losing weight can reverse these symptoms.

While there are other treatments for menopause symptoms, such as hormone replacement therapy or other medications, a low-fat diet may be a non-drug option for women, according to Axelrod.

The researchers used data gathered during the Women’s Health Initiative Dietary Modification trial, in which researchers tracked U.S. women between 1993 to1998 to study the effect of a low-fat diet on a variety of health concerns, including heart disease to cancer risk.

Weight loss was not a goal of the diet, which focused on reducing fat and increasing whole grain, fruit and vegetable consumption, but participants on the diet lost an average of 4.5 pounds yearly, the researchers found.

The study is published today (July 11) in the journal Menopause.

Pass it on: Eating a low-fat diet with plenty of fruits, veggies and whole grains could lower menopausal women’s hot flashes and night sweats.

Editorial Note: This article has been updated to include Axelrod’s comments.