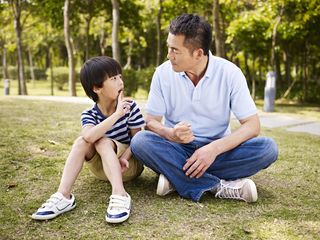 Adults might as well flip a coin if they are trying to determine whether a child is lying.

A new study found that adults correctly classified children's truths and lies 54 percent of the time, or only slightly better than chance. The findings are based on an analysis of 45 previously published experiments involving nearly 8,000 adults and about 1,800 children in all, the researchers said.

"[The result] is significantly above chance when you talk about it in statistical terms, but in practical terms, when you say 54 percent and chance is at 50 percent, it's maybe not as significant as we want it to be," said study lead researcher Jennifer Gongola, a doctoral student of psychology and social behavior at the University of California, Irvine. [10 Scientific Tips for Raising Happy Kids]

Children as young as 3 years old can tell a lie, but there is little research on how good adults are at discerning those lies. To learn more, Gongola and her colleagues looked at earlier work, combining studies to produce a big sample for analysis.

The experiments that the researchers looked at were set up in different ways, but a classic setup involved a researcher asking whether a child had looked at a toy after he or she was asked not to do so. A video recording done when the adult was out of the room revealed whether the child was lying.

"We're finding what's referred to as a truth bias," Gongola said. "People tend to assume that they're being told the truth even when you tell them that 50 percent of the children they view are telling a lie."

The researchers also found that professionals such as social workers, police officers and teachers outperformed parents from the general public, but only slightly, with an average rate of 56 percent accuracy.

"We can say that, yeah, maybe on average, professionals are doing better than the layperson," Gongola said. "But this advantage is really slim."

The takeaway is that a professional's judgment on a child's falsehoods or truthfulness shouldn't be taken as the final say on a matter, she said.

However, adults aren't great detectives even when it comes to catching other adults' lies. Other meta-analyses have shown that adults can distinguish between lies and truths in other adults at an average rate of 55 percent, the researchers said. [11 Facts Every Parent Should Know About Their Baby's Brain]

"We assume that maybe children are poor liars or that we are good deception detectors," Gongola said. "[But] it's really important that we know that we aren't as accurate as we may think we are just based on our own lay intuition."

The study was published online on Sept. 29 in the journal Law and Human Behavior.