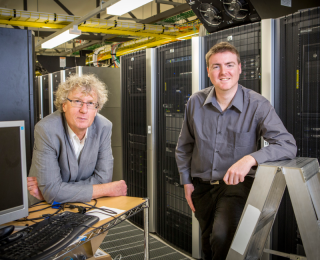 The first-ever computer-generated music, recorded in the labs of computer pioneer Alan Turing in 1951, has been restored, according to The British Library.

A BBC unit in Manchester, England, made the recording using a primitive computer that filled much of the ground floor of Turing's Computing Machine Laboratory. The computer no longer exists, but the 12-inch single-sided acetate disc, cut by the BBC's technician while the computer played, remains. The record disc captured three songs: "God Save the King," "Baa, Baa, Black Sheep" and Glenn Miller's famous swing melody "In the Mood."

Though Turing is best known for breaking the German Enigma code during World War II and is credited as one of the fathers of computing, this recording reveals he was also a musical innovator. [Creative Genius: The World's Greatest Minds]

"Alan Turing's pioneering work, in the late 1940s, on transforming the computer into a musical instrument has largely been overlooked: it's an urban myth of the music world that the first computer-generated musical notes were heard in 1957, at Bell Labs in America," researchers at the University of Canterbury wrote in a blog post for The British Library.

The old computer was designed with special instructions for a loudspeaker, which Turing called the "hooter," to emit a short pulse of sound. By repeating the instruction over and over, Turing realized the tick and click sounds formed one steady note. In different repeating patterns, different notes were produced. According to the researchers, Turing had no interest in pursuing the musical application of the computer. Instead, he used the musical notes as indications of the computer's work — a note to signify "job finished," or "error" and so on.

However, after reading Turing's handbook on computer programming, Christopher Strachey — a schoolteacher and pianist with an interest in computing — had an idea for how to use the computer to program musical notes.

"I sat in front of this enormous machine," Strachey recounted in an interviewwith Nancy Foy for Computing Europe in 1974, "with four or five rows of 20 switches and things, in a room that felt like the control room of a battleship."

The all-night programming session worked: The computer hooted out the British national anthem, and later resulted in a job offer for Strachey to join the lab, according to the researchers. The BBC recording was made later that same year, and Strachey would go on to become one of Britain's top computer scientists.

When the recording was uncovered and played, it was off pitch at first, the University of Canterbury researchers said. However, with some restoration work drawing from the same Turing handbook that allowed Strachey to program the music, the researchers were able to bring back the true sound of the old computer.

"It was a beautiful moment when we first heard the true sound of Turing's computer," the researchers wrote.

The 2-minute restored recording can be heard on The British Library's website.