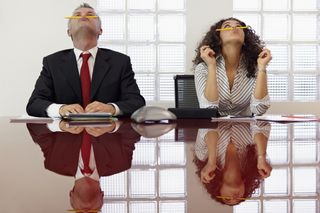 Although boredom is as familiar a feeling as excitement or fear, science has only begun to understand what makes people bored. Recently, six scientists who emerged after living for a year in isolation on the Mauna Loa volcano as part of the HI-SEAS (Hawaii Space Exploration Analog and Simulation) experiment, which simulated the isolation that future space travelers might experience traveling to and living on Mars, said that boredom was their biggest challenge.

Boredom "has been understudied until fairly recently, but it’s [worth studying] because human experience has consequences for how we interact with each our and our environment," said James Danckert, professor of cognitive neuroscience at the University of Waterloo in Ontario in an interview with Live Science.

It's easy to think of examples of mind-numbing situations, such as waiting in line at the DMV, listening to a monotonous lecture or being stuck in traffic. It's much more difficult to define boredom.

A 2012 review of boredom research that was conducted in educational settings suggested that boredom is some combination of an objective lack of neurological excitement and a subjective psychological state of dissatisfaction, frustration or disinterest, all of which result from a lack of stimulation.

The one aspect about which most people seem to agree is that boredom is unpleasant. "I describe it as an aggressively dissatisfying state," Danckert said. In this way, boredom is not the same as apathy, because bored people are in some way motivated to end their boredom. [10 Things That Make Humans Special]

Boredom is also distinct from hopelessness and depression. Compared to hopelessness, "boredom may involve feeling stuck in a dissatisfying current situation, but it does not involve believing that success is impossible or that engaging in satisfying activity is unattainable in the future," said Taylor Acee, assistant professor of developmental education at Texas State University, San Marcos, in an email interview with Live Science.

And although boredom is similar to depression, in that both are unpleasant states of low-arousal, Acee and Danckert agreed that depression tends to involve negative, inward-looking focus, whereas boredom relates to a negative feeling that arises from lack of stimulation from the outside world.

Who gets bored more often?

Research has shown that some people are more prone to boredom than others. A 2012 paper looked at the psychological attributes that could make a person more susceptible to boredom, and it found that people who have conditions that affect their attention, such as ADHD, may get bored easily. Also, people who are over- or undersensitive to stimulation, and those who are unable to express what activities might be engaging enough to combat their boredom, are more likely to get bored.

In his own research, Danckert has found that people who are reaching the end of their young adulthood years, around age 22, may be less likely than those in their late teens to get bored. The reason may hint at a larger cause of boredom, he said. "In that age range, the frontal cortex is in the final stages of maturation," and this part of the brain helps with self-control and self-regulation, Danckert said.

People who have experienced traumatic brain injury may also be more prone to boredom, which can affect their recovery, he said. It's possible that this relates to injury to the frontal cortex. [10 Things You Didn't Know About the Brain]

The bright side of boredom

The key to avoiding boredom, for those both inside and outside of the groups of people most prone to boredom, is self-control, Danckert said. "Those with a higher capacity for self-control are less likely to experience boredom," he said.

Recent research has linked boredom to increased creativity. Danckert said that in studies that he has done, he has found that boredom tends to inspire creativity only in people with high levels of self-control.

So far, there's no tidy, evolutionary reasoning to explain why we get bored. But that doesn't mean that boredom can't do us some good. "The positive side of boredom is that, if responded to in an adaptive way, it is this signal to explore, [to] do something else. That what you're doing now isn't working," said Danckert, noting that he was explaining the philosophical reasoning of University of Louisville professor of philosophy Andreas Elpidorou, who defends the value of boredom his is own work.

How to stop being bored

Research on boredom isn't far enough along to reveal ways to fight it. There are, however, some hints as to what might make a task boring or not. "Boredom is often experienced when an individual perceives themselves as being temporarily confined to a situation or activity that lacks value for one reason or another," Acee said.

Tasks could lack value because they are unenjoyable, uninteresting, too easy or too difficult, or because we consider them unimportant on a personal level, he said. [So Bored! 8 Facts from the Science of Boredom]

One way to keep a tedious task from being boring might be to think about it differently. "Reflecting about the potential usefulness, relevance or meaningfulness of an activity can help individuals increase the value they assign to the activity," said Acee. Although it hasn't been tested, Danckert similarly suggested that mindfulness training or meditation might help ward off ennui.

It's important to note that, unless you find Candy Crush particularly meaningful, turning to technology is not the likeliest boredom cure. It may provide an increased level of engagement, but probably little else, said Danckert, emphasizing that there isn't really any way to say for sure whether what we're experiencing in our plugged-in present is any less boring to us than what preceding, smartphoneless generations have experienced.

Both Acee and Danckert said that boredom is something we need to know more about. Boredom has been associated with plenty of negative outcomes, including low academic performance, high dropout rates, mistakes on the job, depression, anxiety and a lowered sense of life purpose, Acee said.

Even if it doesn't lead to these problems in most people, boredom plays a major role in our lives, particularly if we find that our work or time in the classroom is snooze-inducing. "Generating knowledge about boredom through research can help inform us about how to design educational programs, structure work environments, advise patients and clients and manage our day-to-day lives," Acee said.