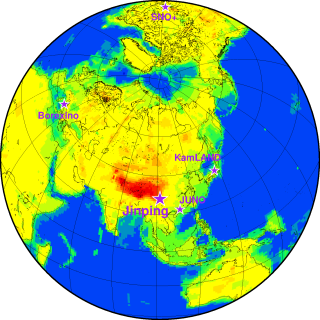 By 2022, scientists expect to be able to detect at least 536 antineutrino events per year at five underground detectors.
(Image: © Ondrej Sramek)

The searing heat deep inside Earth is what keeps the planet churning — creeping tectonic plates, erupting volcanoes and a working magnetic field — but how much of this sizzling energy does the planet have in its tank?

Scientists have long wondered how much energy remains in the planet today, 4.6 billion years after the rocky world formed. Now, a team of researchers plans to have an answer to the gargantuan question by 2025. By determining how much energy Earth has left, scientists will better understand the building blocks of the planet and its energy-spending processes.

When all of the energy is used up, that means Earth will "die" in the sense that the moon is "dead" because it does not have the energy for mantle convection, volcanism, and other planetary processes.

These planetary processes run on two types of energy: primordial energy, which is the heat left over from Earth's violent formation, and nuclear energy, or the heat produced during natural radioactive decay. [Photos: The Strangest Places on Earth]

Past calculations of Earth's inner energy have varied.

"We're in a field of guesses," one of the study's authors, William McDonough, a professor of geology at the University of Maryland, said in a statement. "At this point in my career, I don't care if I'm right or wrong. I just want to know the answer."

Here's how McDonough and his team will tackle the problem: As has been done for past estimates, the scientists will measure Earth's geoneutrinos, or the antimatter partners of neutrinos — ghostly subatomic particles that pass right through Earth relatively unscathed. The antineutrino particles are byproducts of nuclear reactions, resulting from radioactive decay of elements such as thorium and uranium.

"The particles will tell us about how many atoms of uranium and thorium are inside the Earth. Therefore, that will tell us about how much radioactivity potential there exists," McDonough told Live Science. "We know the Earth radiates 46 terawatts of heat, or power, and so what we determine for nuclear energy, the difference would amount to the primordial energy left."

Previous research has demonstrated that these heat-producing radioactive elements alone are insufficient to account for the 46 TW the Earth radiates; therefore, residual primordial energy must be present. Determining the amount of energy left from both sources will also offer insight into how the Earth is burning its fuel, its consumption rate in the past and its future fuel budget.

The detectors used to find the antineutrino particles are each the size of a small office building, housed about a mile underground. Antineutrinos are identified inside the detector when the particles crash into a hydrogen atom, causing two characteristic light flashes. There are currently two such detection facilities, in Japan and Italy, which record only about 16 collisions per year. Three new detectors — one in Canada and two in China — are expected to come online in 2022.

"Once we collect three years of antineutrino data from all five detectors, we are confident that we will have developed an accurate fuel gauge for the Earth and be able to calculate the amount of remaining fuel inside Earth," McDonough said in the statement about the team's 2025 goal.

The study was published Sept. 9 in the journal Nature Scientific Reports.