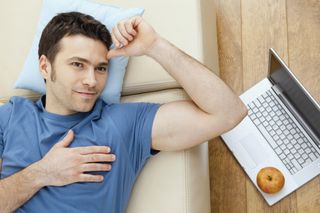 Sleep problems and gloomy daydreams may worsen the symptoms of a rare psychiatric disorder that causes people to feel as though they are "unreal," a new report of one man's case suggests.

In the report, researchers in the United Kingdom looked at sleep problems and daydreaming habits in a man with a disorder called depersonalization-derealization disorder, which makes the person feel disconnected from the real world. It turned out that, the worse he slept on a given night, the more severe his symptoms were the following day.

Moreover, repetitive and negative daydreams that the man experienced on some days were also linked to worsened psychiatric symptoms. [Daydreaming Again? 5 Facts About the Wandering Mind]

The new findings suggest that some of the symptoms of the disorder may be treated by addressing the person’s sleep problems and daydreaming in therapy, the researchers wrote in the study, which was published in August in the journal Frontiers in Psychology.

Between 1 and 2.4 percent of the population may have depersonalization-derealization disorder, according to a 2013 study that was published in the journal BMC Psychology. People with the condition may have the persistent feeling that they are observing themselves from outside of their bodies. They may also feel as though the things around them are not real, according to the Mayo Clinic.

Traditionally, psychiatrists don't consider that sleep problems are a potential contributor to the symptoms of dissociative disorders, but the new study suggests that perhaps such problems should be considered, and addressed with treatments, Dr. Matthew Lorber, acting director of child and adolescent psychiatry at Lenox Hill Hospital in New York City, told Live Science. Lorber was not involved in the study.

The patient in the new study was 24 years old, and had experienced trauma during his childhood that included an assault. Dissociative disorders are usually rooted in severe past trauma, the researchers noted.

At the start of the study, the researchers assessed the man's mental health and told him what exactly the study was going to involve. During this initial meeting with the researchers, the patient told the researchers that he often had vivid dreams, and that his sleep patterns were irregular.

Then, for 40 days, the researchers texted the man six times a day with questions about his psychiatric symptoms, mood, sleep quality and the frequency of his daydreaming experiences, and recorded his replies. [5 Things You Must Know About Sleep]

They found that the symptoms of his disorder were worse on those days that followed nights when he had not slept well.

Moreover, his symptoms were also worse on the days that the man experienced negative daydreams. In contrast, when his daydreams were more positive, his symptoms did not get worse, according to the study.

Previous research has also suggested that there is a link between daydreaming and the worsening of this disorder’s symptoms, but the new study shows that only daydreams with negative, and not positive, content may affect these symptoms, the researchers said.

The new findings are in line with some other research, which has suggested that improving sleep quality in people with dissociative disorders may help to improve their symptoms, the researchers said.

However, Lorber said that more research is needed to test the new findings in a larger number of patients.