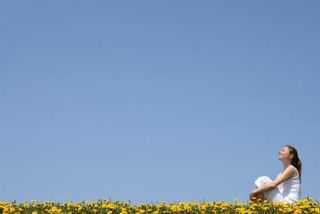 Just how distracting daydreams can be depends on where exactly your wandering mind takes you, a new study suggests.

The farther away your mind drifts — in time and space — the harder it is to remember what you just did.

For instance, daydreams of your childhood home or a vacation on the other side of the world had a more pronounced effect on memory than thoughts of where you just were an hour ago.

However, since the study was conducted in an experimental environment and not the real world (subjects were prompted to daydream), future work should examine whether the same holds true for natural daydreams, the researchers say.

Previous studies have shown that daydreams — or off-task thoughts — can hinder our ability to remember things we've just learned. Peter Delaney of the University of North Carolina at Greensboro and his colleagues wanted to know if the content of the daydream could influence this effect.

In the first experiment, 148 college-age students were asked to memorize two lists of words presented on a computer screen. Between learning the first list and the second, students engaged in one of three tasks – reading a passage aloud, thinking about their parent's home or thinking about the place where they currently live. Afterwards, they were asked to recall as many of the words as they could from both lists.

Also, the longer it had been since subjects had visited their parent's home, the fewer words they recalled from the first list. No such memory lapses showed up for the second list, suggesting daydreams did play a role in forgetting words.

In a second experiment with a similar set-up, 116 participants were asked to think about either a vacation in the United States or a vacation abroad in between learning two lists of words.

Those who thought about international travels remembered fewer words on the first list than those who only daydreamed about domestic trips.

The research has implications for those who want to forget about something.

"If there's something you don't feel like thinking about, you're better off remembering a more distant event than a close event, to try to put it out of your mind for a while," Delaney said. "It can help you feel like you're in a different situation."

The results are published in the July issue of the journal Psychological Science.