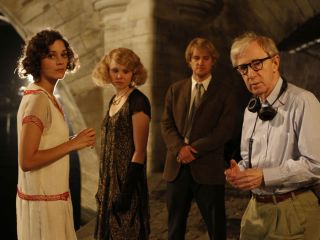 In Woody Allen's film Midnight in Paris, the main character Gil, played by Owen Wilson (center) travels back in time from modern-day Paris to the city in 1920s. Allen is on the right.
(Image: © © SONY PICTURES CLASSICS)

Spoiler Alert: This story contains plot details from the film "Midnight in Paris," including its ending.

For some of us, the past has a special allure. In the Oscar-nominated film "Midnight in Paris," the main character, Gil, doesn't just daydream about escaping the unsatisfying present to Paris in the 1920s — his place and time of choice. Picked up at the stroke of midnight by famous writers in an antique car, he travels there.

In spite of these nostalgia-filled trips, Woody Allen's film is, in fact, a story about coping with the present, according to two psychologists.

"It was Gil's journey through the past that helped him identify what was missing in his present and that gave him the courage to take steps to correct it," said Krystine Batcho, a professor of psychology at Le Moyne College in New York who studies nostalgia.

In the film, Gil appears to experience two distinct kinds of nostalgia, according to Batcho.

A character in the film, Paul, refers, unflatteringly, to nostalgia as "denial of the painful present."

"To some extent, that is true, because by definition, it really is dissatisfaction with the present in a way where the dissatisfaction is great enough that someone actually prefers an era or time period from the past," Batcho said.

Out of the past

"If someone were to maintain the fantasy, [using] that as a psychological device would not be very healthy. The character Gil does not," Batcho said. "Gil does find his way back and that is what makes the film so special."

Gil's own personal nostalgia is rooted in his past success as a screenwriter and his old dreams of becoming a great writer, like those he meets in the 1920s, including Ernest Hemingway and Gertrude Stein.

These thoughts keep Gil from becoming lost in the past, according to Batcho.

"He comes around to saying 'Maybe I could still write that great novel'. He is still trying to chase after some of those old dreams," Batcho said. "Those old dreams, because he was busy being successful in Hollywood, are part of his nostalgia for his personal past."

Jennifer Yalof, a doctoral student in clinical psychology at the Massachusetts School of Professional Psychology, who has examined the psychological dimensions of Allen's films, sees Gil's journey as a repudiation of nostalgia, since he ultimate rejects the past for the present.

But like Batcho, she sees Gil's journeys back in time as crucial to his progress.

"It's kind of a writer's dream to be near Gertrude Stein, F. Scott Fitzgerald and Ernest Hemingway, and not only have them look at your work, but say you really have talent. … He used the fantasy of going back in time to gain that strength to be able to function in the present," said Yalof, who is also interning with MIT Medical's Mental Health and Counseling Service. [Creative Genius: The World's Greatest Minds]

Nostalgia can be interpreted as a type of fantasy, and fantasy is generally thought of as a defense mechanism that allows someone to lose themselves and block out the bad, according to Yalof.

The story culminates when Gil ends his fantasy by acknowledging the past was not all golden and the future isn't so bad. During a conversation with his love interest Adriana in Belle Époque Paris, Gil recounts a dream that prompted him to realize there were no antibiotics in the past.

The moment reminded Batcho of an interview she did as part of her research, in which an older person was recounting fond memories of childhood, and then remembered, less fondly, using an outhouse.

"It was kind of a Woody Allen moment," she said. "I consider that a turning point or a realization."

In the same conversation, Gil gives voice to the other important realization: While the present can be unsatisfying, so is life itself.

Yalof points out that people turn to the past to escape in many ways — from participating in historical re-enactments, to attending Renaissance fairs or even reading books, such as "Jane Eyre" or "Wuthering Heights," depicting bygone eras.

"I believe these opportunities to 'escape' into a historical era hold a different appeal to different individuals," Yalof told LiveScience in an email. "Who knows what Civil War re-enactors think/feel when they put on costumes? However, something comes alive for them that is impossible to experience in the present."

Other movies Allen has made, including "Manhattan" and "Radio Days," employ nostalgia as a theme, but Allen tempers the romanticism with a realization that the good old days weren't always so good, she said.