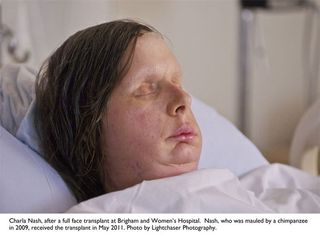 It's a harrowing experience just a few dozen people have endured: losing their faces to horrific injuries and then, against all odds, receiving new ones, through face transplant surgeries.

The first of these patients, Isabelle Dinoire, has died, her doctors confirmed this week. Dinoire lost her life in April to cancer, perhaps related to the anti-rejection drugs that transplant recipients must take to prevent their immune systems from attacking their new tissue, news outlets reported. Dinoire received the world's first face transplant in 2005 after her pet dog mauled her while she was unconscious from taking sleeping pills. The surgery replaced her destroyed nose, lips and chin with tissue from a donor.

Dinoire's story was always bittersweet. She gave few interviews, but her public statements reflected on the difficulty of pioneering a surgery so tied with identity and sense of self. "It was excruciating," she said of the recovery from the surgery, speaking to the BBC World Service in 2012. The fame from the surgery was impossible to escape in her small town, she said. "Children would laugh at me, and everyone would say, 'Look, it's her, it's her.'"

However, Dinoire also said that she had grown used to her new appearance and described the donation as "magical." [9 Most Interesting Transplants]

Face transplantation is, psychologically, unlike other transplants, said Carla Bluhm, a psychologist at the College of Coastal Georgia who began researching the psychological implications of the surgery shortly after the news of Dinoire's procedure came out.

Humans are well equipped to recognize and respond to faces. One particular part of the brain, called the fusiform face area, becomes especially active when a person views a face. This area is tucked along the side of a gyrus, or wrinkle, in the temporal lobe of the brain. Imagine it low in the skull, tucked behind the ear.

Psychologists debate exactly how the fusiform face area works. Some think it has evolved to focus on faces, in particular. Others think it's a region that distinguishes fine details in any object that a person has recognized repeatedly. Either way, the brain is an expert at faces. When shown random static (or a burnt piece of toast), humans will think they see a face — a phenomenon called pareidolia.

Everyone's face changes as they age. Research suggests that people are generally able to cope with changes such as the gradual addition of wrinkles or saggy skin. A 2011 review of body image and aging research suggested that people realign how they prioritize their appearance as they age. One study published in 2000, for example, found that older women reported dissatisfaction with their looks, but also that they increasingly saw their health and ability to function as more important than beauty.

But the changes that come with trauma are a different story. Not only is the change sudden, but the damage that occurs in patients who later get face transplants is total — so extensive that the surgery isn't just about having a different face, but about having a face at all. [The 7 Biggest Mysteries of the Human Body]

"The kind of traumas they've undergone are really difficult for humans to get adapted to," said Bluhm, who wrote "Someone Else's Face in the Mirror: Identity and the New Science of Face Transplants" (Praeger, 2009) about these issues. "They just want to blend in as being human again."

The events that bring people to face transplantation are typically horrifying. Carmen Blandin Tarleton received a face transplant in 2013, six years after her estranged husband broke into her house, beat her with a baseball bat, and burned her face and body with industrial lye. Richard Norris — who got a new face, jaws, tongue and teeth in 2012 — was injured in a shotgun blast. Carla Nash received a new face in 2011 after being mauled by a friend's pet chimpanzee in a widely publicized attack. Patrick Hardison, a fireman from Mississippi, lost his face while trying to rescue a woman from a burning mobile home in 2001.

"Kids ran screaming and crying when they saw me," Hardison, who underwent a face transplant in 2015, told New York magazine about the years he lived with his injuries. "There are things worse than dying."

There is limited data on how people adjust psychologically after receiving a face transplant, because so few people have gone through the procedure. A 2013 report published in the journal Psychosomatics studied a single patient for three years and found that the person's depression level dropped by half compared with before the transplant. [7 Ways Depression Differs in Men and Women]

The person (who is not identified in the report) also reported a steep decrease in anxiety about body image, and a big increase in quality of life, after the surgery. The patient rated their appearance as a 3 on a 10-point scale before the surgery, and as a 7 on the same scale three years after it.

But patients often experience a wave of jubilation immediately after the surgery and then report more complicated feelings a year or two later as they come to terms with their new faces, Bluhm said. She is now starting a research project to study how face transplant recipients shift their perception of their identity after the surgery.

"We do have the ability to morph our looks and to reidentify," she said.