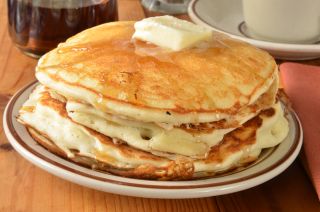 Buttermilk is the liquid left over when making butter from milk, thus the name. While it's not exactly a health drink, buttermilk is still a better alternative than some other drinks on the market.

The methods for making buttermilk have changed over the years. In the old days, buttermilk was fermented by naturally occurring bacteria as unpasteurized butter cream sat for a length of time before churning. This process is called "ripening."

"Nowadays, as all milk and cream are pasteurized (which kills the naturally occurring bacteria), buttermilk is made by reintroducing Lactobacillus acidophilus, the probiotic bacteria that gives buttermilk its sour taste," said Dr. Vincent Pedre, author of the book "Happy Gut" and an internist in New York City.

Buttermilk is also used to make baked goods and other foods, such as buttermilk biscuits and pancakes. Buttermilk adds a tangy flavor to baked goods, but that isn't the only reason why it is a popular ingredient. The acid in buttermilk also breaks down long strands of gluten in the dough. This makes baked goods more tender, according to Fine Cooking Magazine.

Buttermilk also contains a wide range of vitamins and minerals, including calcium, iron, magnesium, phosphorus, potassium, sodium and zinc, according to the U.S. Department of Agriculture (USDA).

This sour tasting drink has also been shown to have some health benefits. "A recent study showed buttermilk reduced the growth of colon cancer cells," said Dr. Jennifer Jackson, an internist at Ascension Via Christi Health. "That's one small step for man, one giant leap for bovine breastmilk."

Another study published by the journal Nutrition found that drinking buttermilk for a short period of times can reduce blood pressure in some individuals.

Also, as mentioned above, buttermilk contains probiotic bacteria. Other cultured drinks and foods like kefir and yogurt also contain probiotics. This type of bacteria has been found to have many health benefits, including adding in digestion and helping with irritable bowel syndrome, according to the National Institutes of Health.

Though buttermilk has its benefits, it should be consumed in moderation. Estrogen found in dairy products may be related to hormone-type cancers, including cancers of the breast and prostate. Also, if you are allergic or sensitive to milk, stay away from buttermilk. Even though it isn't technically milk, it is a milk product and can still cause a reaction, according to the Mayo Clinic.