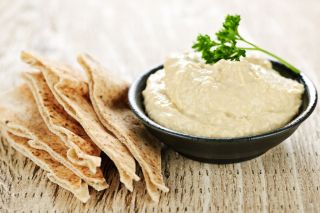 Hummus is a Middle Eastern food that has become popular in other areas of the world. It is a dip or spread made from cooked, mashed chickpeas. Tahini (a ground sesame seed paste), lemon juice, olive oil, salt and garlic are added to the mashed beans for flavor.

"Traditional hummus is made of chickpeas as the primary ingredient — after all, the word "hummus" means chickpeas in Arabic," said Rebecca Shenkman, director at the Villanova College of Nursing's MacDonald Center for Obesity Prevention and Education (COPE). However, she added, hummus products are now being made with other ingredients, such as cannellini beans, edamame, sweet potatoes, black beans and zucchini.

Traditional hummus is low in fat, typically contains no sugar and is low in calories. It is also high in protein, so it provides energy without packing on the pounds.

"Hummus is a great on-the-go snack," said Dr. Vincent Pedre, author of the book "Happy Gut" and an internist in New York City. "In fact, it is rich in healthy fats, making it a satisfying in-between meal snack with carrots and/or celery. I often recommend this to get patients away from the processed snacks or sweets they may reach for between meals."

The healthy fats contained in hummus are polyunsaturated and monounsaturated fats. Eating these types of fats may help improve blood cholesterol levels, decrease the risk of heart disease and help control blood sugar, according the Mayo Clinic.

Hummus also has around 15 grams of fiber per cup, according to the U.S. Department of Agriculture (USDA). Fiber is beneficial for weight control and stabilizing blood sugar.

According to a study published by the Journal of Nutrition & Food Sciences, adults who ate chickpeas or hummus on a regular basis had a lower body mass index and waist circumference. When compared to people who don't eat hummus, adult hummus and chickpea consumers were 53 percent less likely to be obese. They were found to be 51 percent less likely to have elevated glucose levels, as well.

Hummus may also be a good snack for those worried about cancer risks. "Chickpeas in hummus may help reduce your cancer risk," said Jennifer Fitzgibbon, a registered oncology dietitian at the Stony Brook University Cancer Center. "Foods that contain folate may reduce the risk of colorectal cancers (like colon cancer), possibly because of the nutrient's role healthy cell division. What's more, researchers believe dietary fiber helps promote the growth of healthy bacteria in the colon, which is also protective against cancer."

Hummus also contains a wide range of vitamins and minerals other than folate, including vitamin K, zinc, iron, magnesium and vitamin C.

While hummus is a very healthy snack choice, that doesn't mean that it can be consumed in large quantities. Even though it is low in fat, it still contains calories. One cup of hummus has around 408 calories, according to the USDA. This isn't a lot, but it still counts toward daily calorie intake, and eating more than a serving per day can add up.

One cup of hummus also has around 15 grams of fiber, which is 59 percent of the recommended daily consumption. Too much hummus and stomach issues, such as diarrhea, may ensue.

Chickpeas are also called garbanzo beans. These plants are called legumes and have been cultivated for over 7,000 years, according to The American Institute for Cancer Research. Chickpeas are staples of Greek, Italian, Middle Eastern, Indian, Spanish and Portuguese cooking and can be beige, green, black, and red.