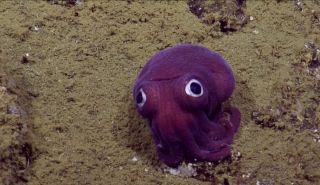 The stubby squid's giant eyes, that "look painted on," caused one researcher to compare the sea creature to a children's toy.
(Image: © EVNautilus/YouTube)

A purple squid with eyes so googly it could easily be mistaken for a character in the movie "Finding Nemo" was recently spotted by scientists off the coast of Southern California.

The so-called stubby squid (Rossia pacifica) is a species of bobtail squid native to the northern Pacific Ocean. These adorable sea creatures can be found in waters from Japan to Southern California, and typically dwell along the ocean floor, at depths of around 984 feet (300 meters), though they have been spotted as deep as 4,260 feet (1,300 m), according to the Monterey Bay Aquarium Research Institute (MBARI).

The stubby squid's giant eyes, that "look painted on," delighted the scientists aboard the Exploration Vessel (E/V) Nautilus. In a live stream of the Nautlius' undersea explorations, one researcher said the googly-eyed squid looks "like some little kid dropped their toy." [Photos: See the World's Cutest Sea Creatures]

"On that watch it happened to be a lot of geology folks or ecology folks, so a lot of the commentary was of course more like 'What is this thing, it's so cute!' and sometimes we have less of that when we see rocks," Samantha Wishnak, a science communication fellow aboard the E/V Nautilus, told Live Science.

The scientists on watch during the squid sighting also initially misidentified the stubby squid as a cuttlefish, which the squid is closely related to. Wishnak said the E/V Nautilus team was able to rule out cuttlefish, as the species is not found in the eastern Pacific Ocean. With a few other ideas for what the species might be, the researchers on board collaborated with scientists ashore and at the University of California, Santa Barbara, and MBARI, to identify the stubby squid.

Stubby squids are nocturnal hunters, so Wishnak said it was exciting to see the animal in its "somewhat natural behavior" rather than hidden in the sea floor.

"They actually have this pretty awesome superpower, they can turn on a little sticky mucus jacket over their body and sort of collect bits of sand or pebbles or whatever they're burrowing into and make a really nice camouflage jacket," Wishnak said. "When they go to ambush something and prey on something, they're able to sort of turn off that mucus jacket."

Other stubby squid sightings by divers have resulted in the same "deer in the headlights" kind of reaction, Wishnak said. The animals are used to being in darker waters, camouflaged from view.

"I think what we encountered was a squid who was not expecting to see us in any way," Wishnak said.

The E/V Nautilus is currently on a four-month expedition to explore the eastern Pacific Ocean. Next, the ship will move from the coast of Southern California to the San Francisco Bay. The vessel's mission is to explore the oceans and seek out the unknown, and is operated by the Ocean Exploration Trust, a nonprofit organization founded by oceanographer Robert Ballard.

Recent discoveries on this expedition have included a mysterious purple sea orb and a sighting of the world's largest bony fish, the Mola mola.