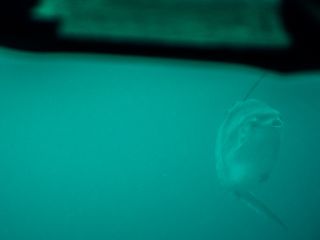 Scientists aboard a research vessel were treated to a sighting of the world's largest bony fish: the Mola mola.

The gigantic Mola mola is the heaviest of all the bony fish. These fish can measure 14 feet (4.3 meters) vertically and 10 feet (3 m) horizontally, and weigh nearly 5,000 lbs. (2,300 kilograms), according to National Geographic. Because the Mola mola's back fin never grows, it has a bullet-like shape and looks like a slow-swimming saucer.

The Mola mola, also known as an ocean sunfish, is commonly seen throughout the world's oceans and is considered evolutionarily advanced as they are thought to be one of the most recent fish families. However, scientists know very little about the bony fish. [What the Heck?! Images of Evolution's Extreme Oddities]

"Their actual biology is relatively little known," Rich Bell, a fisheries scientist aboard the Exploration Vessel (E/V) Nautilus, who was part of the team that saw the Mola mola, told Live Science. "Mating, their growth, migration patterns, are not particularly well-known."

Despite its bizarre shape and large size, the Mola mola can actually launch itself out of the water into the air, according to Katelyn Standerfer, a science communication fellow aboard the E/V Nautilus.

"They're just such odd-looking fish," Standerfer told Live Science. "They fascinate me because there is so little known about them despite their large size. Seeing one on our dive was the highlight of my trip aboard the E/V Nautilus."

The vessel is currently on a four-month expedition to explore the eastern Pacific Ocean. Operated by the Ocean Exploration Trust, a nonprofit organization founded by oceanographer Robert Ballard, the E/V Nautilus' mission is to explore the oceans and seek out the unknown. On past expeditions, the research vessel has discovered previously unseen shipwrecks and elusive sea creatures. Just last week, the researchers found a mysterious purple sea orb that scientists have yet to identify.

Spotting sea creatures during these expeditions, though perhaps not the direct mission of the expedition, provides samples and observations for a range of disciplines and scientists, according to the E/V Nautilus team. Sightings of known fish, such as the Mola mola, can expand scientific knowledge about the range or depth of the species, said E/V Nautilus spokesperson Susan Poulton. It is also possible for the researchers to observe new behaviors of the fish,

The exploration vessel's use of remotely operated vehicles can alter the scientific results, however, Bell said, as the noise and light may affect what researchers see during the mission.

"We're never really sure if that's drawing certain fish toward us or scaring them away, but our presence can affect what we see and which species we encounter while we're exploring," Bell said.