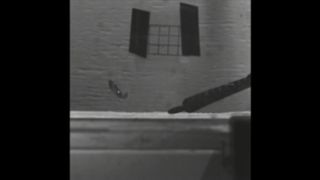 The mangrove rivulus does quite well for a fish out of water. Its 'tail-flip' helps it get around to find food, flee predators and get back into the water.
(Image: © Society for Experimental Biology)

Strong leaping skills help a bizarre hermaphrodite fish live out of water for weeks at a time, new research shows.

The mangrove rivulus is a small tropical killifish that's found in swamps from Florida to Brazil, measuring no bigger than 3 inches (75 millimeters) long. Its dull appearance hides the fact that the fish is sort of a freak; it can survive on land for as long as two months and it has a strange sex life.

All members of the species are hermaphrodites (though a few males have been found), and they are the only known vertebrate, or animal with a backbone, to reproduce by self-fertilizing. Researchers discovered in 2007 that the fish can live on land for up to 66 days straight, crowding inside the damp tunnels of rotting mangrove logs and even inside old beer cans and coconut shells, Reuters reported at the time. [That's Odd! The 10 Weirdest Animal Discoveries]

During its terrestrial days, the amphibious fish alters its gills so that it can breathe through the skin. But part of the fish's amazing ability to withstand life on land comes from its powerful leap, new research shows.

The team of scientists filmed a rivulus stranded out of water and found that the fish did a "tail flip" to travel. Lying flat on the ground, it curled its head up and then sprung its tail into action, propelling itself both vertically and sideways, the video footage shows.

For comparison, the researchers filmed a largemouth bass flopping around out of water. The bass curled its body into a "c" shape and pushed off the ground, mostly vertically and without much control over its direction.

"Bass are very poor performers at jumping on land, as expected since they very rarely make terrestrial excursions," study researcher Benjamin Perlman, of Wake Forest University, explained in a statement. Bass typically only end up on land when they are washed ashore, chased out by a predator or accidently hit the ground when leaping out of the water to catch an insect.

"The amphibious rivulus is better adapted to land living and capable of directing its jumps on land using more forceful jumps," Perlman added.

This ability allows the rivulus to get out of aquatic environments that have low oxygen concentrations or high levels of hydrogen sulfide, a compound that is toxic to fish, the researchers say. Its flair for jumping also enables the fish to flee predators and hunt for terrestrial prey such as crickets.

The videos of the fish were released last week by the Society for Experimental Biology.