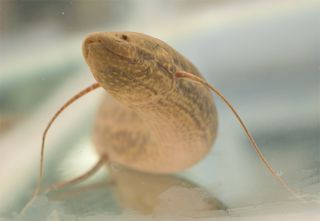 The African lungfish (Protopterus annectens) displayed primitive walking behavior in the lab, using its skinny fins to bound and walk across the floor.
(Image: © Yen-Chyi Liu/University of Chicago)

Air-breathing fish that can hop and walk across the floor on their fins hint that walking may have evolved underwater before such animals began migrating on to land, scientists find.

The distant ancestors of humans and all mammals, reptiles, birds, amphibians and other four-limbed animals, or tetrapods, are fish that eventually developed the ability to breathe on land. One of the few living fish related to these ancient land-dwellers are air-breathers known as lungfish, which are found today in Africa, South America and Australia.

Now scientists find that an African lungfish (Protopterus annectens) can lift its body clear off the floor and propel itself forward using scrawny "limbs," abilities previously thought to have originated in early tetrapods.

"This shows us — pardon the pun — the steps that are involved in the origin of walking," said researcher Neil Shubin at the University of Chicago. "What we're seeing in lungfish is a very nice example of how bottom-walking in fish living in water can easily come about in a very tetrapod-like pattern."

The lungfish in question has an eel-like body and a pair of flimsy hind fins.

"If you showed me the skeleton of this creature and asked me to make a bet on whether it walks or not, I would have bet it couldn't," Shubin said. "Their fins seem like the furthest thing from walking appendages possible."

The lungfish's history makes them popular pets among paleontologists, and anecdotes and rumors circulated among scientists for years about walking behavior allegedly seen in these strange fish. To uncover the truth behind these stories, the researchers designed a special fish tank in which they could record a lungfish's motions on camera from the side and below for in-depth analysis.

Their videos revealed the lungfish commonly used its hind or pelvic limbs to "bound," moving both limbs at once like one would hop, and to "walk," alternating limb motions. [Video of lungfish walking]

"I find it exciting and surprising that even with such small fins, this lungfish is able to not only propel itself, but lift its body clear offthe bottom as well," researcher Heather King, an evolutionary biologist at the University of Chicago, told LiveScience. "If you were to look at just the skeleton of the lungfish, you might never guess that it was capable of this behavior, especially since they don't have feet!" she wrote in an email.

The forelimbs look similar to the hind limbs, but were not involved in such bounding and walking movements. The researchers are not certain why that is, but "it is possible that if the hind limbs alone are sufficient for propelling the fish, the forelimbs would not be used," King said.

The lungfish's ability to support its body on its slim limbs might be aided by their buoyant air-filled lungs, researchers suggest.

"It shows what's possible in an aquatic medium where you don't have to support yourself with gravity," Shubin said.

This discovery might redraw the evolutionary route scientists think life took from water to land. Many of the steps needed to adapt to surface-dwelling could have occurred millions of years before early tetrapods developed limbs with digits and took their first steps on shore, King said.

These findings might also make us rethink whether recently discovered approximately 380-million-year-old tracks were in fact made by early tetrapods. They could have been created by other kinds of fish instead.

King, Shubin and their colleagues detailed their findings online Dec. 12 in the Proceedings of the National Academy of Sciences.