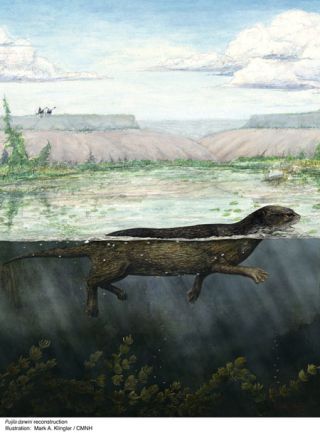 A fossil of a primitive "walking seal" with four legs and webbed feet has been found in the Canadian Arctic and dated to be at least 20 million years old.

The newfound species, dubbed Puijila darwini, might be the long-sought missing link in the evolution of pinnipeds — a group that includes modern seals, sea lions and walruses — explaining how the animal group moved from land-dwellers with legs to the semi-aquatic, flippered swimmers around today.

"The land-to-sea transition in pinnipeds has been difficult to study because the fossil evidence has been weak and contentious," said Natalia Rybczynski, a paleontologist with the Canadian Museum of Nature who led the expedition that discovered the skeleton. "Puijila is important because it provides a first glimpse into the earliest stages of this important evolutionary transition."

The discovery is detailed in the April 23 issue of the journal Nature.

From feet to flippers

Modern pinnipeds all have flippers — limb adaptations well-suited for gliding through the water in search of a fresh seafood dinner.

Paleontologists have long thought that these specialized limbs evolved over time as terrestrial species began testing out life in the water. Charles Darwin himself (for whom the new species was named) predicted this land-to-sea transition in The Origin of Species: "A strictly terrestrial animal, by occasionally hunting for food in shallow water, then in streams or lakes, might at last be converted in an animal so thoroughly aquatic as to brace the open ocean."

But until Puijila's discovery, the most primitive pinniped known to science (Enaliarctos) was already fully flippered.

Rybczynski and her team found the skeleton purely by accident during an expedition to the Haughton meteor impact crater on Devon Island, one of Canada's northernmost Arctic islands. The team's vehicle had run out of gas, and the first bone of the animal was found while waiting for team members to return with fuel.

The bones found on that trip and a subsequent expedition in 2008 produced a surprisingly complete (almost 65 percent) skeleton.

The researchers at first thought that the animal was a prehistoric otter, but when they examined it more closely they found they had a far more exciting specimen that shed light on an important aspect of animal evolution.

"The remarkably preserved skeleton of Puijila had heavy limbs, indicative of well developed muscles, and flattened phalanges which suggests that the feet were webbed, but not flippers. This animal was likely adept at both swimming and walking on land," said Mary Dawson, curator emeritus of Carnegie Museum of Natural History in Pittsburgh. "For swimming it paddled with both front and hind limbs. Puijila is the evolutionary evidence we have been lacking for so long."

The animal was a four-legged carnivore about 43 inches (110 centimeters) from nose to tail. Along with its webbed feet, it had an elongated, streamlined body that would have allowed it to glide through the water with speed and agility.

Its large teeth, short snout and jaw suggest it had a nasty bite. Puijila likely hunted on both land and in the water; possible preserved stomach contents suggest the animal's last meal included a duck and some type of rodent.

Puijila itself was not an ancestor of modern seals, but the researchers think that both groups evolved from a common ancestor. Researchers are still working to figure out exactly where Puijila fits in on the pinniped family tree.

Other fossils of fish and pollen indicate that the Arctic location where Puijila was once had a cool, coastal temperature environment, similar to present-day New Jersey.

"Puijila is the first fossil evidence that early pinnipeds lived in the Arctic," Rybczynski said. "This discovery supports the hypothesis that the Arctic may have been a geographic center in pinniped evolution."

(The name Puijila means "young sea mammal" in Inuktitut, the language of the Inuit people in Nunavut, the territory of Canada where the fossil was found.)

The lakebed where the fossil was found suggests that the semi-aquatic mammals also went through a freshwater-to-seawater transition, as freshwater lakes would have frozen in the winter, forcing the animals to travel over land to the sea in search of food.

The team is planning to go back to the Devon Island site this year to look for more fossils.

The Puijila skeleton will be on display at the Canadian Museum of Nature in Ottawa from April 28 to May 10. A model of the fossil will be included in the "Extreme Mammals" exhibition at the American Museum of Natural History in New York, which opens on May 16.