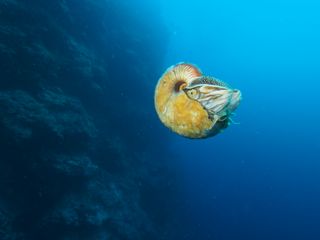 An elusive sea creature that boasts a vibrant golden shell covered in thick, slimy hair was recently spotted for the first time in 31 years, researchers say.

The Allonautilus scrobiculatus, a species of mollusk in the same family as the nautilus, was spotted off the coast of Papua New Guinea in the South Pacific in early August, the scientists said. This was the same region where the animal was spotted more than three decades ago, they added.

The Allonautilus' shell has been known to science since the 1700s. However, the mollusk's "soft parts," including its living tissue, weren't observed until 1984, when Bruce Saunders, a professor of geology at Bryn Mawr College in Pennsylvania, spotted the creature, said Peter Ward, a professor of biology and earth and spaces sciences at the University of Washington. Ward saw the mollusk a few weeks after Saunders in 1984 and then again earlier this month. [Marine Marvels: Spectacular Photos of Sea Creatures]

The Allonautilus is so rare likely because it is completely reliant on scavenging to survive, Ward said. "It needs to find a big, dead fish, and the world just doesn't have much room for big scavengers," Ward added.

Scientists previously categorized the rare Allonautilus in the same genus as the nautilus. That classification was made due to the Allonautilus' shell, which is called a "drift shell" because it drifts all over the ocean after the creature dies, eventually losing its trademark hair to erosion.

However, in an effort to not judge a mollusk by its shell, the researchers noted that, "Of all the various nautilus species, it was the one that really looked different," Ward told Live Science.

The creature was so different that the scientists added the prefix "allo," which is Greek for "other," creating a completely separate genus.

The Allonautilus' shell looks different from the nautilus's in both color and texture, Ward said. The Nautilus pompilius, for instance, is white with blood-colored stripes along its shell, and the Allonautilus scrobiculatus is a bright orange-yellow color. "It's just an amazing color," Ward said.

Alone among nautilus species, the Allonautilus has thick, slimy hair covering its shell, Ward added. "The first time we picked them up, we almost dropped it. It's the most slippery thing," he said.

The shell's sliminess could be an anti-predatory adaptation, Ward said. For instance, fish who try to bite into the Allonautilus will find themselves chomping down on air when the slippery shell shoots out between their teeth.

"[It's really a very cool way not to get eaten," Ward said.

Although the nautilus is considered a "living fossil" because the species has been around since before dinosaurs roamed the Earth, the Allonautilus "is actually really new," Ward said.

The Allonautilus's DNA revealed that it has been on Earth for only 1 million or 2 million years, Ward said, which means the creature could be a recent relative of the nautilus.

The Allonautilus can withstand slightly warmer waters than can the nautilus, which also helps explain the Allonautilus's fuzzy, gooey shell. "As you get shallower, you get more and more predators," Ward said.

The narrow habitats of the nautilus and Allonautilus worry conservationists, who fear the animals' ecosystems could be severely harmed by deep-sea–mining operations.

"They're going to be pulling up unbelievable quantities of sediment," which can smother food supplies and kill off the species, Ward said. "If these things are as rare as I think, any disruption in their food supply is going to kill them off."