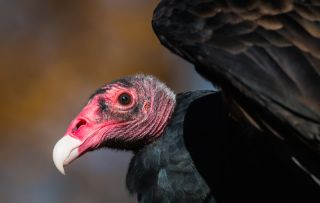 Vultures' faces and large intestines are covered with bacteria that is toxic to most other creatures, but these birds of prey have evolved a strong gut that helps them not get sick from feasting on rotting flesh, according to a new study.

In the first analysis of bacteria living on vultures, the study's researchers found that these scavengers are laden with flesh-degrading Fusobacteria and poisonous Clostridia. As bacteria decompose a dead body, they excrete toxic chemicals that make the carcass a perilous meal for most animals. But vultures often wait for decay to set in, giving them easy access to dead animals with tough skins.

Moreover, vultures will often pick at a dead animal through its back end — that is, the anus — to get at the tasty entrails. Their diet may be filled with toxic bacteria and putrid feces, but vultures are apparently immune to these deadly microbes, the researchers said. [In Photos: Birds of Prey]

"Our results show there has been strong adaptation in vultures when it comes to dealing with the toxic bacteria they digest," Michael Roggenbuck, a researcher of microbiology at the University of Copenhagen, said in a statement.

Like other vertebrates, vultures had more types of bacteria on their faces than in their guts: 528 different types of microorganisms compared with 76.

The DNA of their prey was broken down in the vultures' gut bacterial samples, which suggests the birds have harsh chemical conditions in their gastrointestinal (GI) tracts, the researchers found. The acidic GI tract also filters out many microorganisms that live on decaying carrion, so the large intestines have large amounts of Clostridia and Fusobacteria.

"On one hand, vultures have developed an extremely tough digestive system, which simply acts to destroy the majority of the dangerous bacteria they ingest," Roggenbuck said. "On the other hand, vultures also appear to have developed a tolerance toward some of the deadly bacteria — species that would kill other animals actively seem to flourish in the vulture lower intestine."

Both Clostridia and Fusobacteria appear to have adapted to the vultures' harsh gut conditions, but may also help the birds by further breaking down nutrients, the researchers said.

The scientists also examined fecal samples from captive turkey vultures and other birds, such as the red-tailed hawk and African spotted owl, at the Copenhagen Zoo. Although the zoo animals had similar diets, the fecal bacteria from captive vultures more closely resembled the microbiomes of their brethren in the wild than it did their avian relatives in the zoo, the researchers found.

The vultures' bacterial similarities indicate that their digestive system has more influence on gut bacteria than diet does, the researchers said.

The findings suggest the relationship between microbes and vulture digestion is more complicated than  previously thought, the researchers said.

"The avian microbiome is terra incognita, but it is not unreasonable to suppose that the relationship between birds and their microbes has been as important in avian evolution as the development of powered flight and song," said co-researcher Gary Graves, of the Smithsonian Institution's National Museum of Natural History.

The study was published today (Nov. 25) in the journal Nature Communications.