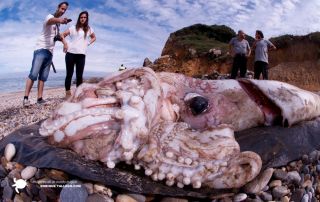 Steeped in mystery, the elusive, deep-sea-dwelling giant squid, with eyes the size of basketballs, may be larger than it has gotten credit for. In fact, the monster cephalopod may grow to be longer than a school bus, researchers say.

Specimens recognizable as giant squid (Architeuthis dux) have been found washed up onshore since at least 1639. However, these sea monsters — which some people say inspired the legend of the giant kraken, though not all scientists agree — are so elusive that they were largely thought to be mythical until they were first photographed alive in their natural environment in 2004.

Ever since giant squid were discovered, there has been considerable speculation as to how large they can get. In a previous analysis of more than 130 specimens, scientists said that none exceeded 42 feet (13 meters) in length. Suggesting that giant squid could grow larger was "a disservice to science," they said. [Release the Kraken! See Photos of Giant Squid]

Still, prior studies estimated that hundreds of thousands of giant squid may live in the ocean, which would suggest that there are plenty of chances for giant squid to grow larger than previously suggested, said Charles Paxton, a fisheries ecologist and statistician at the University of St Andrews in Scotland.

Now, a statistical analysis from Paxton suggests that giant squid may plausibly reach 65 feet (20 m) in total length. This new study extrapolated the maximum sizes this species might reach by both examining a variety of categories of data and examining as much data taken directly from specimens of the creature as was available.

"I've been interested in the last few years about investigating the hard science behind sea monsters," Paxton said.

All in all, Paxton found that it was statistically plausible that giant squid could have mantle lengths of about 10 feet (3 m) and total lengths of 65 feet, "and that's a conservative analysis," he said.

"I am extrapolating here, and extrapolation can sometimes be a bit sketchy," Paxton said. "But I think these are fairly safe extrapolations. I genuinely think that giant-squid size has been underestimated."

Paxton noted that there are claims that giant squid can grow to be 100 feet (30 m) long. "I don't think giant squid can get that big, but while a measurement of a giant squid total length of 19 meters [62 feet] can be questioned, I'd say it certainly wasn't impossible," Paxton said.

Some scientists have suggested that squid parts may stretch over time, leading to overestimates of the animal's size.

To help resolve that question, "there are people in New Zealand and Spain who fairly regularly collect specimens of giant squid, and I'd like them to see just how stretchy they are postmortem," Paxton said.

Another study, reported in 2015 in the journal PeerJ, suggested that it's human nature to exaggerate the sizes of the ocean's giants. The study found that people overestimate measurements for whales, sharks and squid.

Paxtondetailed his findings online May 17 in the Journal of Zoology.