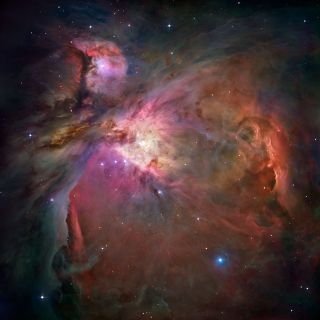 Thousands of stars are forming in the cloud of gas and dust known as the Orion Nebula, which is featured in the VR immersive installation, "The Hubble Cantata."
(Image: © NASA, ESA, M. Robberto (Space Telescope Science Institute/ESA) and the Hubble Space Telescope Orion Treasury Project Team)

An event combining virtual reality and live musical performance aims to bring together a 20-piece orchestra, a 100-person choir and breathtaking views of the cosmos captured by the Hubble Space Telescope.

And it's going to be available to the public for free.

"The Hubble Cantata"will premiere in Brooklyn, New York, on Aug. 6 at the Prospect Park Bandshell, as part of the BRIC Celebrate Brooklyn! Festival. Up to 6,000 people will be able to experience an installation featuring 360-degree sound delivered by live musicians and vocalists, including two opera soloists. [Spaced Out! 101 Astronomy Images That Will Blow Your Mind]

And accompanying the musical presentation will be a unique visual event that will transport listeners into a sight that is literally out of this world.

A concentric array of eight speakers surrounding the audience will enable the concert audio to travel around and through them in 3D space, according to the event's acoustics researcher and designer, Terence Caulkins.

The installation represents a collaboration among artists, engineers and scientists, developed at the New Museum in New York City as part of its art incubation program, New Inc.

The musical commission originated with the concept of accompanying Hubble imagery and collaborating with Mario Livio, an astrophysicist who worked with Hubble for 24 years, "Hubble Cantata" composer Paola Prestini told Live Science in an email.

Since Hubble launched on April 24, 1990 — the first optical telescope deployed in space — it has made more than 1 million observations while orbiting Earth at approximately 17,000 mph (27,359 km/h), capturing distant supernovas, unprecedented views of objects within our solar system, and galaxies that are at least 13 billion years old, to name just a few.

The brightest spot in Orion's sword

But some of Hubble's most awe-inspiring photos are of nebulas — ancient clouds of dust and gas — that can be the remains of a dead, exploded star, or nurseries where new stars are born. An estimated 10,000 nebulas lurk in the Milky Way, and they represent a wide range of sizes and shapes. Many carry names inspired by those shapes, such as the Eagle Nebula, the Horsehead Nebula, the Ring Nebula and Thor's Helmet Nebula. [See some of the Hubble Space Telescope's most iconic photos]

The Orion Nebula, located 15,000 light-years from Earth and the brightest point in the Orion constellation, is the main attraction in "Fistful of Stars."

Filmmaker and VR director Eliza McNitt told Live Science in an email that she selected the Orion Nebula for the VR experience "because it is a nursery for star birth and reflected the themes of 'The Hubble Cantata,' which tells the story of the birth, life and death of stars and the human connection to the cosmos."

As the cantata unfolds, Orion emerges as a character, one that was "intimately connected to the narrative," McNitt said.

But at the end of the day, "Hubble Cantata" is about people, Prestini told Live Science, calling the installation "less a story about space and more a human story." McNitt agreed, adding that the installation represents our connection to the cosmos, and that the VR experience "explores the parallels between human life on Earth and stars in the heavens."

A Kickstarter campaign for "Hubble Cantata" launched on July 13, to help raise money to take the production on tour throughout the country. Following its debut on Aug. 6, the VR film "Fistful of Stars" will be available to download and view for free on the creators' dedicated app, "giving anyone the opportunity to experience the cosmos," according to the project's Kickstarter statement.