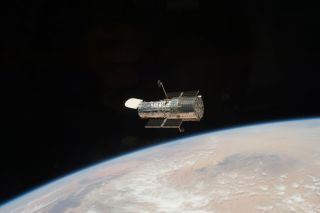 Seen here, the iconic Hubble Space Telescope orbits high above the Earth, after it was released at the close of the STS-125 servicing mission to once more gaze deep into the universe.
(Image: © NASA)

The Hubble Space Telescope, which is celebrating its 25th anniversary in space, has become known for capturing stunning and unprecedented views of the cosmos. But while the famed orbiting observatory has provided amazing views of space, it's also given us new perspectives of Earth.

Because the telescope can gaze across the solar system and beyond, to alien planets far more distant, Hubble has helped scientists understand how the Earth formed, and has even provided clues about how life came to be, said Frank Summers, an astrophysicist at the Space Telescope Science Institute in Maryland, which operates the Hubble Space Telescope.

As such, the observatory is a great complement to NASA's fleet of Earth-observing satellites, such as Terra, Summers told Live Science. [See some of the Hubble Space Telescope's most iconic photos]

"There is a complete Earth-observing program within NASA that generates terabytes of data every week and provides all of the information that goes into the supercomputer models of the weather. Hubble can provide nothing on that," Summers said.

But Hubble's real strength is its ability to function as a general-purpose telescope, Summers said. The observatory can look at planets and galaxies with almost equal strength. What's more, it can gaze into the outer reaches of the solar system to an icy collection of objects called the Kuiper Belt.

When Hubble was launched into space on April 24, 1990, little was known about the Kuiper Belt. Astronomers knew about Pluto, which was then considered a planet, which orbited far beyond the rest of the planets in the solar system, on an oddball orbit that sometimes brought it inside the orbit of Neptune.

Fast-forward more than two decades, and more recent discoveries of Pluto have led astronomers to change its designation from a planet to a dwarf planet, or simply one of the largest objects in the Kuiper Belt, Summers said.

This is important for Earth science because these objects — ones that are Pluto's size and smaller — represent how the solar system looked early in its history. They give a partial sense of how Earth could have come to be 4.5 billion years ago, Summers said.

Another new direction for the Hubble telescope was realized shortly after it launched. By 1992, the first exoplanets— worlds outside Earth's solar system — were found. At first, astronomers could only detect huge gas giants that were much larger than Jupiter, but as technology and techniques improved, planets as small as the moon have been found.

"Hubble doesn't contribute to finding these solar systems, but the most important thing Hubble has done is to look at the atmosphere of these planets," Summers said.

One method of finding exoplanets is to look at how much a star's light dims when a planet passes across the face of it, from the perspective of Earth. If the system is close enough to Earth, and the planet is big enough, sometimes astronomers can see a difference in the elements of the star when the planet orbits in front.

"That's really cool, actually, to detect molecules of atmosphere in planets that are light-years away, many trillions of miles," he said.

Over time, astronomers hope to use this technique to figure out which alien atmospheres may be suitable for life — specifically, atmospheres with nitrogen and oxygen, similar to Earth's.