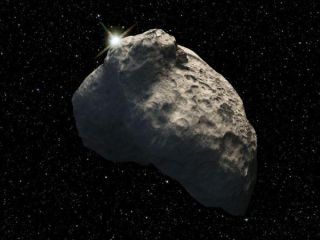 NASA's Hubble Space Telescope has discovered the smallest object ever seen in visible light in the Kuiper Belt, a vast ring of icy debris that is encircling the outer rim of the solar system. This artist's concept of the needle-in-a-haystack object found by Hubble is only 3,200 feet across and 4.2 billion miles away.
(Image: © NASA)

Each week Life's Little Mysteries presents The Greatest Mysteries of the Cosmos, starting with the coolest objects in our solar system.

The final frontier of our solar system remains a place as mysterious as it is dark and distant. Beyond the realm of the planets, starting about 3 billion miles (4.5 billion kilometers) away and probably extending well into interstellar space, reside many tens of thousands of icy bodies in the region known as the Kuiper Belt.

Pluto, an official planet until 2006 , stands as the largest catalogued object in the Kuiper belt, the doughnut-shaped band which itself was not confirmed by direct observation until 1992. (Some people believe the giant planet Nibiru lurks out there, and is on a crash course for Earth.)

Like Pluto, other Kuiper Belt objects have stable orbits (mostly) beyond Neptune . The orbits of another group, however, called the scattered disk, pass much closer and farther out from the sun. The biggest object yet found in this solar system outback is Eris, a tad larger than Pluto. [The 7 Strangest Asteroids: Weird Space Rocks in Our Solar System ]

In 2015, astronomers will get their first close look at a Kuiper Belt object, Pluto, courtesy of NASA's New Horizons spacecraft . The mission should help unlock many of the secrets that extend to the farthest edge of our solar system. Some of these greatest mysteries of the Kuiper Belt are:

How far does the Kuiper Belt go?

Astronomers estimate that the Kuiper Belt starts at somewhere between 30 and 50 astronomical units (AU) from the sun. (An AU is equivalent to the average Earth-sun distance, about 93 million miles, or 150 million kilometers) But the Kuiper Belt could in fact have multiple bands.

"What we're looking at now peters out around 50 AU, but that doesn't mean [the Kuiper belt] doesn't come back at 70 or 100 AU," said Alan Stern, principal investigator for New Horizons and a planetary scientist and associate vice president in the Space Science Division at the Southwest Research Institute in Texas.

The Kuiper Belt is made of the leftovers from planetary formation the rubble heap, essentially, outside of where gravitational forces constructed the big planets. Learning more about the Kuiper Belt's extent estimates have it at 20 times wider than the asteroid belt and containing perhaps 200 times the mass will help with theories of solar system genesis around other stars. [How Far Is it to the Solar System's Edge? ]

Origin of the Kuiper classes

Within the Kuiper Belt itself, two classes of objects have stood out, in addition to the scattered disk-type bodies on their wild orbits.

"Cold" Kuiper Belt objects have circular, planet-like orbits, and appear redder in color than "hot" objects, which have orbits that loop well out of the orbital plane of the cold objects and inner planets. (The designations "cold" and "hot" do not relate to temperature, but behavior by analogy hot gases move about more than cold.)

Given these differences, scientists think the cold Kuiper Belt objects formed right where we see them now. The hot objects, for their part, most likely originated nearer to Jupiter. Early in the solar system's history, they were knocked into their orbits as the giant planets migrated away from the sun due to gravitational interactions. Same goes for the scattered disk.

"We don't know what the provenance is of the different classes of objects in [the Kuiper Belt]," said Stern.

Astronomers have begun firming up earlier detections of exo-Kuiper Belts at expected distances from their stars. Our solar system continues to look less-and-less distinct as astronomical instruments improve, and that speaks to a greater likelihood of life as we know it in the universe.

"We expect that if solar systems like ours are common, Oort Clouds and Kuiper Belts will be as well," Stern said. "So finding these will help inform us about how common our own type of system is."