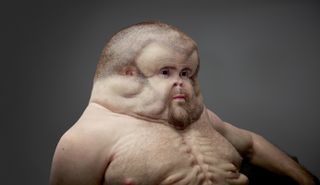 The human brain and neck are highly vulnerable to injury during a crash, so Graham was designed to have an exaggeratedly reinforced skull and no neck at all.
(Image: © Transport Accident Commission)

An artist's lifelike sculpture casts the human body in a way that may look distorted and grotesque, but the odd-looking figure — scarcely recognizable as human — is uniquely designed to face deadly challenges on modern roads.

"Graham" — as the sculpture has been named — has a massive skull, but his features are tiny and recessed. His enormous head perches atop a barrel-shaped trunk with no visible neck to support it. Rows of flaccid sacks vaguely resembling deflated breasts dangle between his ribs, and an extra joint protrudes halfway down his shins, which end in shortened, broad hoof-like feet.

While Graham may not win any beauty contests, he wasn't made to be pretty — he was built for survival. Patricia Piccinini, the Australian artist who created him, collaborated with a trauma surgeon, a collision investigator and Australia's Transport Accident Commission (TAC) to visualize a novel version of human anatomy optimized to withstand a high-speed car crash. The sculpture is part of a new TAC initiative to raise awareness about road safety. [Top 10 Leading Causes of Death]

And by dramatically exaggerating certain aspects of Graham's body, the sculpture reveals where people are most vulnerable during a crash, according to TAC officials.

"People can survive running at full pace into a wall," TAC chief executive officer Joe Calafiore said in a statement. "But when youꞌre talking about collisions involving vehicles, the speeds are faster, the forces are greater and the chances of survival are much slimmer."

In the instant when a car crash happens, the kinetic energy of the abrupt collision is transferred to the body of whoever is inside the vehicle, which is why high-speed crashes cause such severe injuries, Dr. Robert Glatter, an emergency-room physician at Lenox Hill Hospital in New York City, told Live Science in an email.

Glatter, who was not involved in the TAC initiative, said that during a car crash, damage frequently occurs in the chest, ribs and internal organs. Traumatic injury to the knees, legs, feet and ankles is also common, he said.

But a crash's greatest force is typically absorbed by the parts of the body least able to withstand the impact — the head, brain and neck, Glatter said.

Graham's highly reinforced skull, along with his other modifications, could allow him to emerge from a high-impact collision with fewer serious injuries, Glatter said.

Head to toe, Graham's extreme modifications combine cushioning and armor to maximize the bodyꞌs protection. The cushioning is made of layers of simulated fatty tissue in the face and torso, while the armor consists of reinforced bone structure in the skull and ribs.

Studies support the effectiveness of cushioning for protecting people struck by moving cars, according to Dr. Patricia Ayoung-Chee, an assistant professor of surgery at New York University's Langone Medical Center, who was not involved in the TAC initiative.

"For a pedestrian, data shows that the higher your BMI [body mass index], the more protected you tend to be in terms of severity of injury," Ayoung-Chee told Live Science in an email.

But if you're already in a car, she added, a combination of cushioning and armor is your best bet for reducing your risk of being hurt. Car-safety designs combine sturdy framework and devices like air bags that absorb impact, "so there really is a role for both," Ayoung-Chee said.

The TAC unveiled Graham on July 21 as an online interactive experience, and as an art installation at the State Library of Victoria in Melbourne, Australia. The sculpture will be on display through Aug. 8 and will then tour other locations in Australia, according to the TAC. Visitors who see Graham in person can use Google Tango — augmented-reality technology — to peer beneath his skin and see how the modified bone and tissue would protect him from harm during a high-speed collision.

Graham's enlarged head contains more fluid and ligaments that suspend a normal-size brain and protect it from bruising. His large skull is designed to mimic a safety helmet, and can absorb much of the force from an impact early, preserving the brain from harm.

Reinforced ribs extend upward to support the skull, like a built-in neck brace, while fleshy sacks between the ribs provide an extra layer of protection for the heart and other internal organs.

And an extra joint in Graham's shin increases leg flexibility, which could prevent leg bones from snapping during a crash, and could improve his ability as a pedestrian to leap out of harm's way, his creators explained in a statement.

Though Graham's appearance may seem bizarre, TAC officials expect that his physical exaggerations will inspire people to recognize the susceptibility of the human body to injury from a car crash.

"You can look at it and laugh it off because it's sort of ridiculous," Ayoung-Chee said. "Or it can make the general public realize that as much as cars have become safer, we're still vulnerable. So maybe it'll encourage some people to have safer driving practices."

"It's a very interesting way to approach a problem and make it more relatable to the nonmedical public," Ayoung-Chee told Live Science.