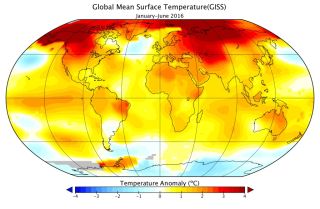 Each of the first six months of 2016 set a record as the warmest respective month globally.
(Image: © NASA/GISS)

This year may be only half over, but 2016 is already on track to be the hottest year ever on record, with each of the first six months, from January to June, setting new temperature records, NASA officials announced this week.

For the first time, NASA shared a midyear climate analysis, doing so because temperature averages this year have been so in excess of previous data, agency officials said. NASA's data showed that each month in 2016 was the warmest respective month globally in the modern temperature record, which dates to 1880. This trend suggests 2016 will surpass 2015 as the hottest year on record, NASA said.

"2016 has really blown that out of the water," said Gavin Schmidt, director of NASA's Goddard Institute for Space Studies in New York City. [Record-Breaking Temperatures Again in First Half of 2016 | Video]

According to Schmidt's calculations, there is a 99 percent probability that 2016, on average, will be hotter than 2015.

So far this year, the planet's average temperature has been 2.4 degrees Fahrenheit (1.3 degrees Celsius) warmer than the late 19th century. In 2009, international climate negotiators agreed in the Copenhagen Accord that warming should not increase more than 2 degrees Celsius (3.6 degrees Fahrenheit) this century. The Accord's temperature threshold was put in place to hopefully avoid the worst impacts of climate change.

A strong El Niño this past year did contribute to these temperatures, but Schmidt said the continued warming trend is mostly due to the effects of greenhouse gases.

While the impacts of El Niño will dissipate by 2017, leaving temperatures slightly lower than this year, Schmidt said 2017 will still average to 1 degree C (1.8 degrees F) above the pre-industrial average.

These record-breaking temperatures have taken a toll on the Arctic, which has seen thinning and melting ice for more than a decade. Five of the first six months of 2016 set records for lowest respective levels of monthly Arctic sea-ice extent (the area of ocean covered by the ice). By late September, Arctic sea ice could reach its lowest extent since satellite record-keeping began, NASA said.

Walt Meier, a sea ice scientist at NASA's Goddard Space Flight Center in Greenbelt, Maryland, said the low sea-ice extent seen in the first half of 2016 follows the continuing trend and is "not at all surprising given the warm air temperatures.

"We're seeing the surface begin melting as much as two months ahead of schedule," he said.

At the peak of summer, the Arctic sea-ice extent now covers 40 percent less area than it did in the late 1970s and early 1980s, NASA said.

Sustained above-average temperatures, as the planet has seen so far this century, can affect the ice sheet, global sea levels, ecosystems and more, according to Schmidt. [Earth in the Balance: 7 Crucial Tipping Points]

One of the very visible effects of the warming climate is the greening of the Arctic. What was once a frozen tundra landscape has practically become a new ecosystem, said Charles Miller, deputy science lead for the Arctic Boreal Vulnerability Experiment (ABoVE) at NASA's Jet Propulsion Laboratory in Pasadena, California.

Increasing temperatures and a warmer Arctic have global implications, Meier said. The jet stream and weather patterns could shift as the Arctic ice cover continues to diminish, he said.