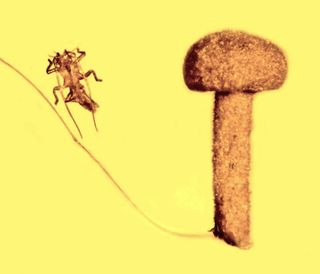 A snapshot of an ancient scene, in three objects: one mammal hair, one insect "skin" and one mushroom.
(Image: © Oregon State University)

An ancient event preserved in a piece of amber reads from left to right like an enigmatic story told in three mysterious emojis: a strand of hair followed by an insect exoskeleton next to a single mushroom.

The tiny objects were all trapped in sticky tree sap about 50 million years ago near the Baltic Sea, according to a new study. Over time, their gooey prison hardened into amber and preserved the organic material within.

A juvenile of a bug similar to a stick insect narrowly escaped meeting a sticky end. But as it yanked itself free, it left behind an empty husk of its "skin," the tough exoskeleton shell that some insects molt as they grow to adulthood. [Skin Shedders: A Gallery of Creatures That Molt]

The unusual scene played out on a very small scale; the amber entombment measures just 0.4 inches (9 millimeters) long, and 0.1 inches (3 mm) wide and deep, according to study author George Poinar, Jr., of Oregon State University, who has analyzed amber and the animals entombed inside it for decades.

(Poiner's work on DNA extraction from insects fossilized in amber earned him a visit from author Michael Crichton during the writing of his novel "Jurassic Park." That work proposed that modern dinosaur clones could be created using blood retrieved from an amber-trapped Jurassic-era mosquito.)

Skin in the game

In the study, Poiner pieced together the chain of events that likely left behind the unusual relics in the Baltic amber. He suggested that a small mammal probably nipped off the teensy brown mushroom from the base of a tree, with the animal also leaving behind a telltale hair, before abandoning its mushroom meal in the sticky sap.

Then along came a hungry stick insect nymph. Measuring about 0.02 inches (0.6 mm) in length, the bug may have been preparing to nibble on the mushroom when it felt the resin begin to take hold, Poinar suggested in the study. The nymph then leapt for its life, abandoning its exoskeleton to the sap.

The insect literally "jumped out of its skin," Poinar said in a statement.

"It would have shed its skin repeatedly before reaching adulthood, in a short life span of a couple months," he added. "In this case, the ability to quickly get out of its skin, along with being smart enough to see a problem coming, saved its life."

The findings were published online July 9 in the journal Fungal Biology.