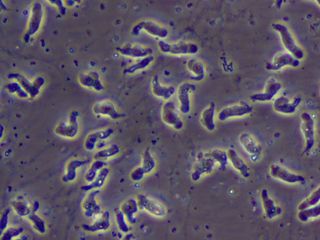 Naegleria is a form of amoeba that is typically found in warm freshwater bodies — such as lakes, rivers and ponds — as well as in soil. Only one form of this amoeba, Naegleria fowleri, can infect people. When Naegleria fowleri infects a person, it can lead to a deadly infection of the brain called primary amebic meningoencephalitis (PAM). Water typically needs to be about 115 degrees Fahrenheit (46 degrees Celsius) for the amoeba to flourish, according to the Centers for Disease Control and Prevention (CDC).

The amoeba enters the brain through the nose, typically when someone goes underwater.

"The amoeba penetrates the brain and 'eats' the brain via a feeding cup," said Dr. Karen Roos, a neurologist and infectious-disease specialist with Indiana University Health. The feeding cup is like a mouth. It is used to ingest blood cells and tissue from the host, according to Stanford. Once the amoeba starts to feed, the brain swells and eventually causes death. Even with treatment, patients often die within a week after their symptoms start, according to the Mayo Clinic.

Infection with Naegleria fowleri is incredibly deadly: Among people who contracted the infection between 1962 and 2015, the fatality rate was nearly 98 percent, according to the CDC.

Though deadly, this type of infection is very rare. Millions of people are exposed to brain-eating amoebas each year, but very few people get sick, according to the Mayo Clinic. From 2005 to 2015, just 37 infections of N. fowleri were reported in the United States, according to the CDC.

"Brain-eating amoebas are not something the general public should worry about if they are swimming in chlorinated pools," Roos said. "I would wear nose clips if I were swimming in ponds or lakes, as the amoeba swims up the nose to get to the brain."

It is a myth that you can get PAM from swallowing water contaminated with N. fowleri, according to the CDC. Rather, the organism enters the brain through the nose.

The very few people who become infected with brain-eating amoebas usually die because the infection and inflammation caused by the organisms are difficult to diagnose and treat, said Dr. William Schaffner, a professor of preventive medicine at the Vanderbilt University School of Medicine.

Symptoms appear two to 15 days after a person has been exposed to the amoeba, and are nonspecific; doctors often have trouble finding the cause of a person's symptoms, according to the Mayo Clinic.

Symptoms usually include nausea and a general ill feeling, and progressive impairment of thinking and activities, which eventually lead to coma, Schaffner said. Some other symptoms of this infection include the following, according to the Mayo Clinic:

However, more often than not, these symptoms are caused by other conditions.

If the infection is treated quickly enough, there is a small chance that the person will recover. For example, a 12-year-old girl in Arkansas survived the infection in 2013. Hospitals most commonly treat brain-eating amoebas with the anti-fungal drug amphotericin B; it is typically injected into a vein or into the space around the spinal cord, according to the Mayo Clinic. The anti-fungal drug kills the amoebas so that they can't cause further damage.

Another drug that is currently being tested for the treatment of brain-eating amoebas is miltefosine, also known by its trade name, Impavido. It is used in combination with other medications for the emergency treatment of the brain swelling caused by an infection with Naegleria. Previously, it was administered only by the CDC, but as of June 2016, it is slowly being released to hospitals across the United States.