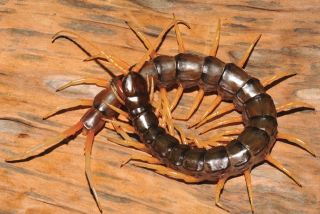 A giant, toothy centipede with countless legs is also a swimming fiend, making it the first known aquatic centipede on record. And it's venomous, to boot, researchers found.

The newfound giant can grow longer than a person's hand. In fact, researchers caught one measuring 7.9 inches (20 centimeters) long, according to the study.

George Beccaloni, a curator of orthopteroids at the Natural History Museum in London, discovered the critter while honeymooning in Thailand in 2001, according to National Geographic. As was typical for Beccaloni, he was looking for bugs, and lifted up a large rock slab, measuring 5 feet long and 8 inches deep, that was lying next to a stream. [Photos: Creepy-Crawly Millipede Scanned in 3D]

As soon as he lifted the rock, a giant centipede skittered out and escaped into the stream, where it hid under a rock. Beccaloni scooped it up with a glass container filled with water, and watched as it "swam powerfully on the bottom of the container with vigorous horizontal undulating motions," he and his colleagues wrote in the study, published in the May issue of the journal ZooKeys.

When Beccaloni took the centipede out of the container, water droplets rolled off its body, letting it dry within moments, he told National Geographic.

Beccaloni took the centipede specimen back to his lab at the museum. After talking with colleagues, the group realized that the Thailand centipede was the same as a newfound centipede they had uncovered in Laos, at the Tad E-Tu waterfall.

The researchers named the invertebrate Scolopendra cataracta; Scolopendra for a known genus of giant centipede, and cataracta after the Latin word for "waterfall." The entire species is based on four specimens — two from Laos, one from Thailand and one discovered in Vietnam in 1928 that has been housed at the Natural History Museum's collections ever since, according to National Geographic.

The centipede has five to six teeth in its lower jaw and its body is a blackish color. "It was pretty horrific-looking: very big with long legs and a horrible dark, greenish-black color," Beccaloni told National Geographic.

A bite from the venomous S. cataracta wouldn't kill you, but it might cause severe pain that lingers for a few days, study co-author Gregory Edgecombe, a researcher of arthropod evolution at the Natural History Museum, told National Geographic.

Perhaps S. cataracta uses its venom to hunt for prey on dry land and in the water, the researchers said.