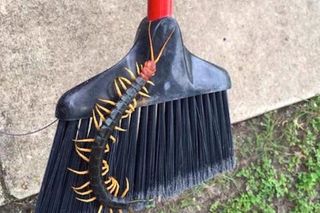 This image of a giant centipede is bound to give many people nightmares.
(Image: © Texas Parks and Wildlife Department via Twitter)

You don't have to be a Kardashian to stand out on the Internet — all you need is at least 20 pairs of bright-yellow legs, a gleaming red head and venomous fangs.

Last week, the Texas Parks and Wildlife Department (TPWD) posted a picture of a giant redheaded centipede to its social media pages that met all of the above criteria. The image quickly went viral. While many people reacted with horror (apparently, giant, colorful centipedes are the stuff of nightmares), this critter doesn't eat people or seriously harm them in any way (at least not usually).

However, giant redheaded centipedes (Scolopendra heros) — which can be found in certain regions of the southern United States and northern Mexico — do take people by surprise fairly often, said Ben Hutchins, an invertebrate biologist with the TPWD. [Gallery: Out-of-This-World Images of Insects]

In a 2014 article published in TP&W magazine, Hutchins explained that S. heros typically hangs out under rocks, logs or leaves. But sometimes, these centipedeswander into people's homes, where they can cause panic, thanks to their 8-inch-long (20 centimeters) bodies and dozens of legs (they typically have 21 to 23 pairs). The critters use their many appendages to grasp prey while feeding.

Though S. heros mainly munches on invertebrates like insects and arachnids, the impressively sized centipede is also known to take down larger prey, such as rodents, snakes, lizards, toads and other small vertebrates. In captivity, giant redheaded centipedes seem to prefer eating moths, according to the University of Arkansas Arthropod Museum.

The critter kills its victims using its "fangs," or forcipules, which are located near its mouth and contain venom glands that inject a toxin into its unlucky prey. The giant redheaded centipede is also thought to inject venom into prey with its many legs, which can make tiny incisions in human skin, according to the Arthropod Museum.

When one of these giant creepy-crawlies bites a human, the result is usually pretty painful, according to both the Arthropod Museum and Hutchins. Victims of these centipede bites report localized pain and swelling, but Hutchins said people also have reported skin necrosis (tissue death), dizziness, nausea and headaches, Hutchins wrote in his article.

Hutchins also lists muscle tissue damage, kidney failure and heart attack as rare side effects of the centipede's nibble. A case report published in 2006 in the Emergency Medical Journal cites a bite from a centipede, likely of the genus Scolopendra, as the cause of acute myocardial infarction (heart attack) in an otherwise healthy 20-year-old man. Whether a giant redheaded centipede was responsible for that unfortunate event isn't stated in the report.

Should you happen upon one of these giant centipedes, pay attention to its colorful body parts. Known as aposematic coloration, or warning coloration, the critter's bright colors serve to warn predators that, while S. heros might look tasty, it's really a poisonous treat. Consider yourself warned.