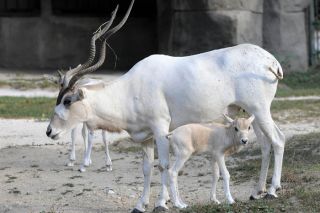 The addax is a species of antelope. Addaxes are also known as white antelopes and the screwhorn antelopes. They are critically endangered; there may be only three remaining in the wild. Extinction may not be imminent, however; about 2,000 are kept in zoos and on ranches around the world.

Both females and males have long, spiral horns that typically are 30 to 43 inches (76 to 109 cm) in length. The horns have 1.5 to 3 spiral twists, according to the Animal Diversity Web (ADW).

The addax’s long flat hooves are like snowshoes. They keep the animals on top of the ever-shifting sand so they don’t sink.

They have white or almost white coats that keep them cool by reflecting sunlight.

The addax once ranged across northern Africa. Today, the only population is found in the Termit & Tin Toumma National Nature Reserve in Niger, according to the International Union for Conservation of Nature (IUCN). This area is part of the Sahara Desert.

Addaxes have been found in many different habitat types in the Sahara: gravelly and sandy plains, dune fields, sandy basins and depressions, pans and wadi systems, according to the IUCN. They prefer harder, packed sands and flatter areas that support vegetation.

Addaxes are social creatures that live in nomadic herds. These herds can have five to 20 members, which is led by a dominant male. They are not nocturnal, but even so, during the hottest times of the summer they will sleep during the day and forage at night, according to Encyclopedia Britannica.

Addaxes are herbivores, which means they only eat vegetation. This tough antelope eats the grass, melons, tubers and scrub that it can find in its desert habitat. It doesn’t need to worry about finding a watering hole oasis, though, as it gets most of its water through the plants it eats. Addaxes only excrete dry feces and concentrated urine because they use every bit of water that they eat.

A female addax’s gestation lasts 257 to 264 days. Females typically give birth to only one baby at a time and have only one baby per year, according to the ADW.

Baby addaxes are called calves. Calves are sand-colored so that they blend in with their surroundings to protect them from predators. After 23 to 39 weeks, calves are weaned and are ready to have their own young at around 2 years old, according to the ADW.

Here is the classification of the addax, according to the Integrated Taxonomic Information System (ITIS):

The addax is just about as close to extinction in the wild as it possibly could be, and is classified as critically endangered by the IUCN. In a 2016 report, the IUCN said a survey had found only three in the wild. While hunting and removal of live addaxes is illegal in Niger, the animals have suffered "massive disturbance" from oil installations operated by the China National Petroleum Corporation, the report said. Also, soldiers assigned to protect the oil wells have been hunting and poaching addaxes.

While extinction in the wild may be all but imminent, zoos have a large population of addaxes. According to Encyclopedia Britannica, there are more than 2,000 addaxes in on private ranches and in American and European zoos. It may be possible to reintroduce addax to their native areas through this population.