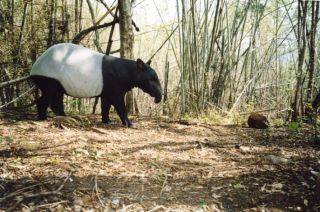 A Malayan tapir walks through the rainforest.
(Image: © DNP-Government of Thailand/WCS Thailand Program)

Tapirs are large mammals that look like wild hogs with anteater snouts. In reality, tapirs are neither, and they are most closely related to horses and rhinos.

The word "tapir" comes from an indigenous Brazilian language; it means "thick," referring to the animal's hide, according to the San Diego Zoo. "Tapir" can be pronounced at least two ways, according to the Random House Dictionary; it can rhyme either with "paper" or with "appear."

In Indonesia, the animal is called "badak," which is the same word for rhinos. And in Thailand, the word for tapir is "P'som-sett," which means "mixture is finished," and refers to the belief that the tapir was created from leftover parts of other animals, according to the San Diego Zoo.

Indeed, tapirs are a bit of a hodge-podge. They are about the size of a donkey. They have round bodies, short legs and stubby tails, sort of like a hippo. Their eyes and ears are small. They have four toes on each front foot and three toes on each back foot, according to the San Diego Zoo.

Their most distinctive feature is their snout. It is flexible like an elephant's trunk. However, the tapir’s trunk is actually its upper lip and nose. Tapirs can grab things with their trunks, somewhat like an elephant. They use them to pluck leaves and fruit out of trees, according to National Geographic, and then place these goodies in their mouths. And, according to the San Diego Zoo, when threatened, tapirs will submerge themselves in a river and use their snouts like a snorkel.

Most tapirs live in South America, from southern Mexico to Venezuela, Brazil and Paraguay. The Malayan tapir is the exception; it lives in Asia — Burma, Thailand, Malaya and Sumatra. No matter the region, all tapirs live in areas with a good water source, including woods, rainforests, mountains and grasslands.

Tapirs are somewhat social creatures. They graze together in groups called a candle, though they don’t seem to have complex relationships.

Tapirs have a relatively long gestation period of 13 months and only give birth to one baby at a time, according to the International Union for Conservation of Nature (IUCN) Species Survival Commission. The offspring, called calves, can stand a couple hours after birth and weigh 15 to 22 lbs. (7 to 10 kg). They look like brown-and-beige-striped watermelons on legs, according to the San Diego Zoo. The pattern is good for camouflage, but they lose the stripes as they get older.

Calves aren’t weaned at a specific time. Usually the mother will decide when she is done feeding the calf (around 10 to 12 months after birth) or the calf will stop nursing when the mother is ready to have another offspring. The calves stop growing at 18 months. At 2 to 4 years of age calves are ready to mate and can live for 25 to 30 years.

Here is the classification of tapirs, according to the Integrated Taxonomic Information System (ITIS):

A 2013 paper in the Journal of Mammology announced that a new species of tapir had been discovered in Brazil and Colombia, although it had been known to local tribes. The Kabomani tapir was said to be the largest mammal to be discovered in 100 years, according to World Tapir Day.

Since the announcement was made, there has been much debate about whether the Kabomani tapir is a new species or is simply the misidentification of juvenile Brazilian tapir. The IUCN's Tapir Specialist Group has not declared the Kabomani tapir a "unit of conservation importance," and the proposed species has not received a categorization on the IUCN Red List of Threatened Species.

The Asian tapir is classified as endangered due to estimated population decline of more than 50 percent in the next three generations. Their endangerment is mostly due to habitat loss.

The Brazilian tapir is listed as vulnerable due to ongoing population reductions estimated to be slightly greater than 30 percent in the past three generations. The reductions are due to habitat loss, illegal hunting and competition with livestock. IUCN also estimates that the current rate of decline may continue for the next three generations (33 years).

Tapirs are the most primitive large mammals in the world. They’ve been around for 20 million years and have changed very little. The first fossil record of tapirs is found from the Early Oligocene period (65.5 million to 23 million years ago). Fossils of tapir ancestors have been found on every continent except Antarctica. Tapirs even lived in Southern California about 10,000 years ago.