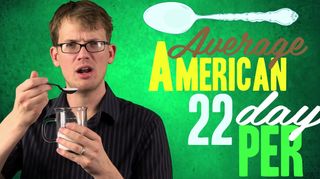 In this series of articles, some of YouTube's most popular science channels take a turn in the spotlight. Their creators employ a range of techniques and styles, weaving together photos and animated graphics, video shot in the studio and on location, sound design, and a general curiosity about the world around them, to explore the unexpected and fascinating details of their unique science stories.

SciShow: Capturing the awesomeness of this bizarre universe

Sometimes, it's the weirdness of science that captures our attention and inspires our imagination. For instance, there's the discovery of an ocean basin that emits a sound that can be "heard" from space, and there are ancient insects that camouflage themselves with the bodies of their dead prey.

Or sometimes, we're intrigued by questions that seem simple but have answers that are maddeningly elusive — like how long it takes for sunscreen to expire or whether it's safe to drink blood.

"SciShow" hosts and creators Hank Green, Michael Aranda and Olive Gordon have made it their mission to tackle interesting science stories — especially the "really weird, peculiar, surprising bits" — and present them in such a way that a wide audience can understand and appreciate them.

They combine animated graphics and photos with on-camera presentations to intrigue, amuse and entertain, spotlighting science's strangeness while using thorough and thoughtful explanations to point out how science isn't all that strange after all.

Mondays and Thursdays bring new episodes of "SciShow Dose" — a quick hit of science — with topics such as hologram making, ocean cleanup and the science of lightning.

Got a nagging question about puzzling peculiarities of day-to-day life that you've never been able to answer? "SciShow" has you covered with its Tuesday and Saturday series "Quick Questions." Find out the truth behind how black light works, why marine mammals are champions at holding their breath and why you can't get enough of that delicious old-book smell.

If it's a deeper dive you desire, there's something for you, too: Every other Wednesday brings a new "SciShow Infusion." These longer videos offer satisfying in-depth explorations of topical science themes, like common misconceptions about cancer, the future of air travel and the irresistible lure of procrastination.

Or maybe you want to catch up on the latest discoveries and scientific research. Friday's "SciShow News" will keep you up-to-date on the biggest and most recent science headlines. And Sunday's "SciShow List Show" compiles a quick overview of science facts organized along a common thread, such as animals that breathe through their butts.

"SciShow" is supported, in part, by crowdfunding on Patreon, which offers participants access to production photos and updates, blooper reels, and other behind-the-scenes perks, as well as an early viewing of one "SciShow" video every week.