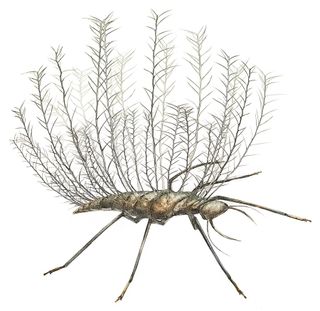 The bizarre, spiky larvae of the Chrysopoid (lacewing) is adapted for carrying debris on its back. Researchers reconstructed this image from a Cretaceous fossil that was preserved in Burmese amber.
(Image: © Wang et al. Sci. Adv. 2016; 2: e1501918)

If you were magically transported back to the mid-Cretaceous, you'd likely have your hands full dodging dinosaur giants like Iguanodon or the toothy Carcharodontosaurus. In a quieter moment, though, you might notice a smaller wonder: tiny insects on the forest floor wearing camo.

New fossils reveal that prehistoric insects cloaked themselves in specks of dirt, plant matter and even the exoskeletons of their prey in order to more effectively hunt and hide from predators. This behavior is seen in a few insect species today, but the new research is the first to show how old and diverse insect camouflage really is.

"Debris-carrying camouflage behaviors of extant insects are commonly closely related to angiospermous plants (flowering plants)," study researcher Bo Wang, a researcher in paleobiology at the Nanjing Institute of Geology and Palaeontology in China, wrote in an email to Live Science. "However, our findings suggest that complicated debris-carrying camouflage behaviors were already widespread in three groups of insects in the pre-angiospermous world, prior to the rise of flowering plants."

Today, lacewing (Chrysopidae) larvae and the larvae of assassin bugs (Reduviidae) both use debris to camouflage themselves. Fossilized examples of this behavior have been found in the Cenozoic Era (the last 65 million years), but only one fossil from an earlier era had shown debris-carryingactivity: a chunk of amber from the early Cretaceous, about 110 million years ago, from Spain.

Wang and his colleagues turned to a huge cache of Cretaceous amber from Myanmar, combing through amber markets in that country and in China for specimens with insects preserved inside. The researchers eventually examined more than 300,000 Burmese amber fossils, plus a few more from Lebanon and France, and discovered that 39 contained debris-carrying insects. [Gallery: Ants vs. Termite Battles Locked in Amber]

In many cases, these insects' backs sport bizarre structures that look like thickets of branches. These are adaptations that provided a sort of basket for carrying around debris, the scientists said. In many fossils, the insects died with their debris loads intact on their backs but no debris located elsewhere around the body, Wang said. This proved that the debris wasn't just dirt and dust that happened to fossilize alongside the dead insect, he said.

The researchers found both lacewing and assassin bugs with debris and branch-like debris-carrying structures. One lacewing from Burma even died carrying the exoskeletons of a bark louse and a plant louse called a psyllid. These were probably the lacewing's prey. The lacewing likely first consumed the louses' insides, then used the victims' bodies as a disguise during future hunting, the investigators said.

The researchers found three assassin-bug larvae, one as large as 0.7 inches (18 millimeters) long, with dust and plant matter decorating their backs. The scientists also discovered debris-carrying in antlions (Myrmeleontidae), a group that gets its name because the larvae prey on ants. Antlion larvae from the mid-Cretaceous were found carrying sand, plant matter, wood particles and bark.

The diversity of the fossil camouflage was surprising, Wang said. The study shows that the camouflaging behavior was well-established by the early-to-mid Cretaceous, as far back as 130 million years ago, the researchers reported today (June 24) in the journal Science Advances. The finds also suggest that more camo-wearing insects may be found elsewhere, he said.

"Previously, few researchers knew [of] this behavior and its fossil," he said. "After the publication of our paper, more paleontologists may pay more attention."