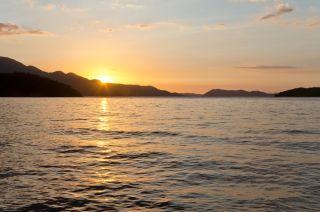 An unusual wave pattern in the Caribbean Sea produces a sound too low to hear.
(Image: © Paolo Costa)

The murmur of lapping ocean waves and the crash of breaking surf are familiar to any beachgoer. But scientists recently discovered a remarkable ocean sound unlike any other, produced by a unique combination of water movement and underwater geography in the Caribbean Sea.

While the sound is at a frequency inaudible to human ears — about 28 octaves below the lowest note on a piano, according to the researchers — it can be detected in space, from the disruptions it causes in Earth's gravity field.

Bounded by South America, Central America and the Caribbean islands, the semi-enclosed basin of the Caribbean Sea acts like the body of a giant whistle, the scientists wrote in the study. And what produces the sound is a recurring but very slow-moving and low-amplitude wave pattern that travels the length of the sea in a 120-day cycle. [Video: 'Whistling' Ocean 'Heard' in Space]

Known as a Rossby wave, its motion combines with pressure on the sea bottom to generate an inaudible solo that resonates from the basin, much like how air blown into a whistle produces a melodic toot.

"When you blow a whistle, you hear something because the air oscillates — pulses in and out of the whistle — and radiates a wave," the study's lead author Chris Hughes, a researcher at the National Oceanography Centre in Liverpool, in the United Kingdom, told Live Science.

"In this case, the water is pulsing in and out of the Caribbean Sea. As the mass of water changes over time, we can detect that oscillating mass from the impact it has on Earth's gravity field," he said.

Motion of the ocean

The researchers' discovery was part of a larger project called "Weighing the Ocean," which aims to measure changes in the mass of all the oceans on Earth over time. Hughes, a professor of sea-level science at the University of Liverpool, explained that as masses of ocean water shift, satellites can detect small changes in Earth's gravity field in response.

Instruments told them that ocean-bottom pressure in the tropics was consistent throughout the year — with one exception.

"We had one particular instrument in the Caribbean Sea that was behaving differently, and we didn't know why," Hughes said.

Highly detailed computer models of ocean activity — with "hundreds of millions of grid points" — all showed the same thing: in the Caribbean Sea, the slow but steady momentum of the Rossby wave recurred in a pattern, Hughes said. It traveled across the length of the sea, and every 120 days it would dissipate at the western boundary and then reappear in the east, starting its journey westward all over again, the researchers discovered. [Sea Science: 7 Bizarre Facts About the Ocean]

A cog in Earth's climate engine

The A-flat note generated in the basin — dubbed the "Rossby whistle" by the scientists — is certainly interesting, but there are more practical applications that could arise from knowing about this wave pattern, such as to help predict sea level change and the risks of flooding, Hughes said.

"Because this oscillation takes 120 days and keeps oscillating over long time scales, it might be possible to predict what sea levels along the South American coast could be doing many months in advance," Hughes explained. "Quite small changes in what we call "mean sea level"  — over a long time scale — can make a big difference in the probability of floods that result from storms and more rapid changes," he said.

The oscillation could even have implications for Earth's climate engine, Hughes added.

As soon as the current leaves the Caribbean Sea, it enters the Gulf of Mexico and becomes the current in the Gulf Stream, the fast-moving and powerful Atlantic Ocean current that is a major part of the climate system.

"This whistle effect is sucking energy out of the current as it goes through the Caribbean Sea," Hughes said. "That might actually have an influence on how the Gulf Stream and the whole climate system operates."

The findings were published online Sunday (June 19) in the journal Geophysical Research Letters.